The following is a list of Catholic Resource Links provided for your convenience.

Popes in their secular role ruled portions of the Italian peninsula for more than a thousand years until the mid 19th century, when many of the Papal States were seized by the newly united Kingdom of Italy. In 1870, the pope's holdings were further circumscribed when Rome itself was annexed. Disputes between a series of "prisoner" popes and Italy were resolved in 1929 by three Lateran Treaties, which established the independent state of Vatican City and granted Roman Catholicism special status in Italy. In 1984, a concordat between the Holy See and Italy modified certain of the earlier treaty provisions, including the primacy of Roman Catholicism as the Italian state religion.   www.vatican.va

Catechism of the Catholic Church

The United States Conference of Catholic Bishops (USCCB) is an assembly of the hierarchy of the United States and the U.S. Virgin Islands who jointly exercise certain pastoral functions on behalf of the Christian faithful of the United States. The purpose of the Conference is to promote the greater good which the Church offers humankind, especially through forms and programs of the apostolate fittingly adapted to the circumstances of time and place. This purpose is drawn from the universal law of the Church and applies to the episcopal conferences which are established all over the world for the same purpose.

The Michigan Catholic Conference promotes a social order that respects the dignity of the human person and serves the common good in the spirit of the Beatitudes and in accord with the teachings of the Catholic Church.Through the development and promotion of sound public policy the Conference enriches the lives of the people of Michigan.Through the administration of benefit services, it offers health, safety, security and protection for diocesan and parish employees and properties. By advocacy and service the Michigan Catholic Conference serves its Gospel-mandated mission of justice with a dedication to integrity and excellence.

In June 2004, the United States Conference of Catholic Bishops' Committee on Migration and The Catholic Legal Immigration Network, INC. (CLINIC) Board of Directors resolved to make comprehensive immigration reform, with special emphasis on legalization, a major public policy priority within the Church.

As part of the Church's response, a diverse group of Catholic organizations with national networks have decided to join the U.S. Catholic bishops' Justice for Immigrants: A Journey of Hope campaign designed to unite and mobilize a growing network of Catholic institutions, individuals, and other persons of good faith in support of a broad legalization program and comprehensive immigration reform. Its goal will be to maximize the Church's influence on this issue, consistent with the immigration reform principles enunciated in the pastoral letter, Strangers No Longer: Together on the Journey of Hope.

The JFI campaign's primary objectives are:

Additionally, the Catholic bishops recognize the conditions that compel people to leave their homes out of desperation and lack of opportunities to provide for themselves and their families, must be addressed if an effective and comprehensive response to migration is to be achieved. Therefore, the Justice for Immigrants campaign will work closely with the Catholic Campaign Against Global Poverty, initiated by the USCCB Office of International Justice and Peace and Catholic Relief Services. That Campaign aims to reduce poverty through trade, aid, and debt reforms. The Justice for Immigrants and Global Poverty campaigns are integrally related in that one addresses the rights and needs of migrants in the U.S., while the other addresses the rights and needs of persons living in their native countries.  www.justiceforimmigrants.org 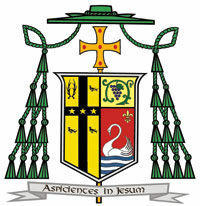 Allen Henry Vigneron was installed as Detroit's fifth Archbishop on January 5, 2009. He is the Metropolitan Archbishop for the Province of Detroit (the seven dioceses of Michigan) and Chairman of the Michigan Catholic Conference. He also serves as Chairman of the Board of Sacred Heart Major Seminary and SS. Cyril & Methodius Seminary in Orchard Lake.

The Diocese of Grand Rapids was established May 19, 1882. The Diocese originally consisted of much of the northern and western part of the Lower Peninsula. Since 1971 the Diocese comprises 11 counties of Western Michigan: Ionia, Kent, Lake, Mason, Mecosta, Montcalm, Muskegon, Newaygo, Oceana, Osceola, and Ottawa. The total square miles is 6,795. The total population of the 11-county area is estimated at 1,283,717 (2000 U.S. Census) and the Catholic population at 162,670.

The Catholic Diocese of Kalamazoo was founded on July 21, 1971. The Second Vatican Council called for the creation of smaller diocese so that bishops could be more available to the people they serve. Five Michigan bishops, the National Council of Catholic Bishop and the Holy Father reviewed a three-year study of existing boundaries and suggestions of realignment of or development of new dioceses in Michigan. This resulted in the creation of two new dioceses in Michigan: The Diocese of Gaylord and the Diocese of Kalamazoo.

Founded in 1857,  the Catholic Church of the Diocese of Marquette, encompasses the whole Upper Peninsula of Michigan.

The Diocese of Saginaw is a faith community consisting of 11 counties in the east central part of the Roman Catholic Province of Detroit. Established by papal decree in June of 1938, the diocese was formed from portions of the Diocese of Grand Rapids and the Archdiocese of Detroit. The 6,955 square miles of the diocese includes 11 counties in eastern Michigan:  Arenac, Bay, Clare, Gladwin, Gratiot, Huron, Isabella, Midland, Saginaw, Sanilac and Tuscola.

The organizational structure of the Catholic Church in the United States consists of 33 Provinces with as many Archdioceses (Metropolitan Sees); 149 Dioceses (Suffragan Sees); the Military Archdiocese; four Eastern-Rite jurisdictions immediately subject to the Holy See in Rome.

On March 29, 1882, Father Michael J. McGivney officially chartered the Knights of Columbus as a fraternal benefit society. The Order is still true to its founding principles of charity, unity and fraternity.

Knights of Columbus are Catholic men, 18 years of age and older, who are committed to making their community a better place, while supporting their Church. Being a Knight is more than camaraderie; it is being involved with your community; supporting your local Catholic Church, while enhancing your own faith; and protecting and enhancing your family life.

Since its humble beginnings more than 125 years, the Knights of Columbus has grown from several members in one council to more than 13,000 councils and 1.7 million members throughout the United States, Canada, the Philippines, Mexico, Poland, the Dominican Republic, Puerto Rico, Panama, the Bahamas, the Virgin Islands, Cuba, Guatemala, Guam and Saipan.

Catholic Relief Services (CRS) carries out the commitment of the Bishops of the United States to assist the poor and vulnerable overseas. CRS promotes human development by responding to major emergencies including natural disasters such as hurricanes and earthquakes, and also works to  fighting disease, poverty, and nurture peaceful and just societies around the globe. CRS operates the Operation Rice Bowl Program which many parishes participate in each Lent. Our diocesan sister relationship with the Diocese of Matagalpa was facilitated through CRS' Global Solidarity Program.

The FDLC represents Roman Catholic Diocesan Offices of Worship and Liturgical Commissions throughout the United States.

Site for information and registration instructions for the University of Dayton Internet Study Program which consists of 6-week long theology mini courses.

This web site, sponsored by St. Anthony Messenger Press, seeks to help Catholics who are considering returning to the Catholic Church. www.oncecatholic.org