Through Baptism, each of us is called to be a disciple of Christ, to serve God and care for one another. Every individual has been given unique gifts which they share with others. Members of the laity and clergy join together to address needs and assist in the spiritual growth of specific populations, as all work together to co-build the Kingdom of God.

The following special ministries are carried out with the approval of the Bishop and the support of the Catholic Diocese of Gaylord.

Jesus said He must go to the Father so He could send the Holy Spirit to teach and guide us. Gaylord Diocese Service Committee (GDSC) often referred to as Charismatics would like to be known as Disciples of the Holy Spirit. Our ministry is spiritual renewal. The gifts and grace received in Confirmation are not always fully utilized. Our ministry desires to assist all in learning that is available and be open to the guidance of the Holy Spirit to draw us ever closer in our relationship with Our Lord, Jesus Christ.

It is only with the help of the Holy Spirit that we can reach the full potential of who God designed us to be.

We can be available to assist in Baptism of the Holy Spirit classes, forming prayer groups and/or training for prayer ministry in your parish.

The cursillo de cristianidad or "little course in Christianity," is a three day program for achieving spiritual renewal or spiritual awakening. It seeks to convey a new sense of individual and organized apostolic action. The program, conducted by priests and lay people, consists of a three-day weekend focused on prayer, study and Christian action and a follow-up program known as the post-cursillo, also known as the fourth day. 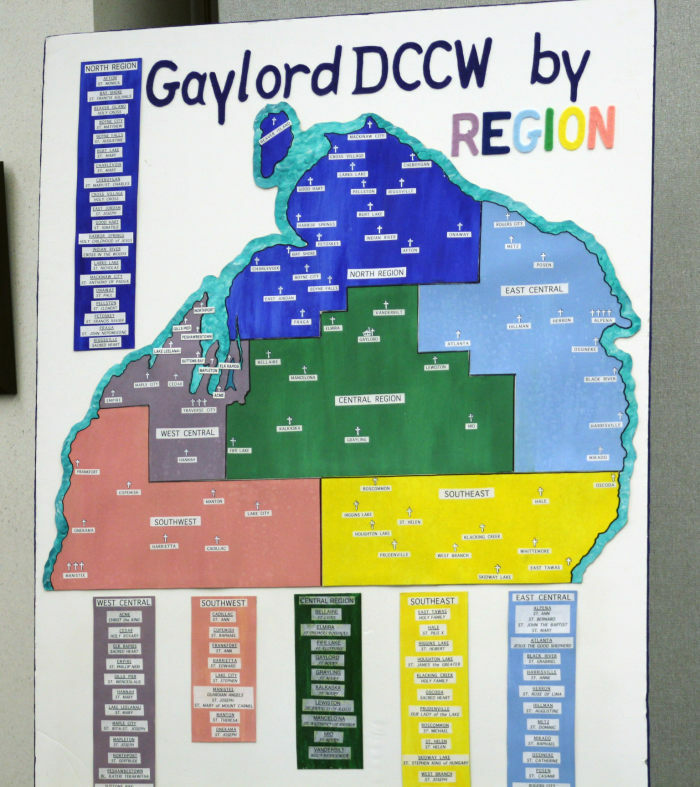 The Gaylord Diocesan Council of Catholic Women serve the women of the Diocese of Gaylord by providing opportunities for involvement in fulfilling the mission of the church as well as opportunities for individual and collective sharing, networking, learning and growing.

What is the Gaylord Diocesan Council of Catholic Women?

The GDCCW offers practical programming and organizational materials that can help establish a foundation of truly Christian community within a given group so that women of mind and heart can work together to achieve meaningful group goals. It supplies suggestions for action, in a variety of ways, in areas of concern to the Church and community.

The Diocesan Council of Catholic Women Board serves as an umbrella over the six Regional DCCW Boards. Each Regional DCCW President and Delegate at Large is invited to be a member on the Diocesan Boards.

The Regional DCCW Board representatives serve as liaisons between the Diocesan Board and the women’s organizations, usually at the parish level with their region. 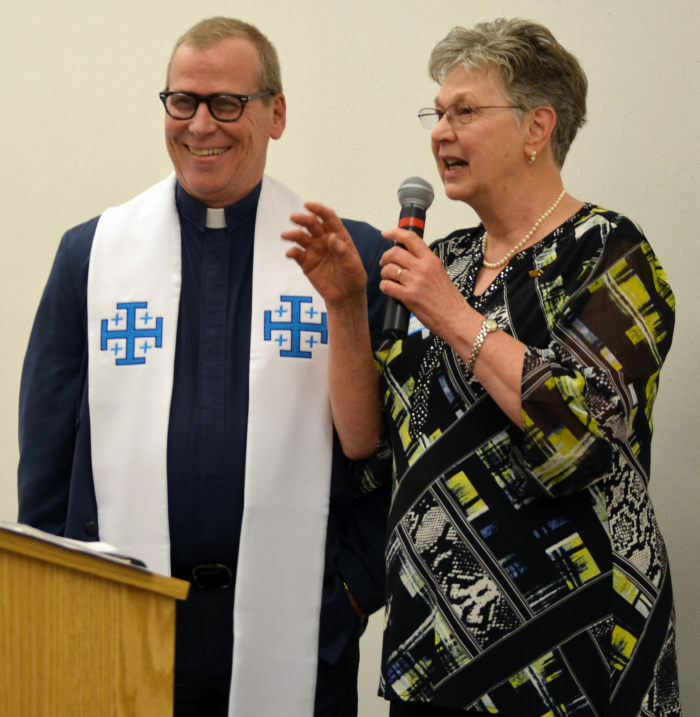 A. To unite the women’s Catholic organizations of the diocese to develop their spiritual growth and leadership potential. To motivate, assist and to act upon current issues in the Church and society.

B. To serve as a medium through which the Catholic women of the diocese may speak and act on all matters of common interest.

C. To further spiritual and material undertakings recommended to the Council by our Bishop or Spiritual Advisor. To work as a part of the NCCW in the interest of the USCCB.

D. The GDCCW shall in no way interfere with the autonomy of any organization affiliated with it.

Structure of the National Organization

An organization for all groups of Catholic Women uniting, strengthening and inspiring them:

History of the Gaylord DCCW:

Our history begins with the history of the National Council of Catholic Women which was founded in March of 1920 under the auspices of the U.S. Catholic Bishops. During World War I, the bishops witnessed the important work done by the Catholic Women’s organizations. The bishops hoped to strengthen their effect by uniting these groups, coordinating their efforts and giving national scope to their work and influence.

The goals of the council were: To give Catholic Women a common voice and an instrument for united action; to ensure proper Catholic representation in national committees and movements; and to stimulate the work of existing Catholic organizations to greater service in meeting the needs of the times.

The Gaylord DCCW was formed in 1971 from the northern part of the Grand Rapids and Saginaw dioceses.

The United States is divided into three regional provinces. Michigan is in the Detroit Province of Region 1. The Detroit province comprises the dioceses of Detroit, Gaylord, Grand Rapids, Kalamazoo, Lansing, Marquette and Saginaw. 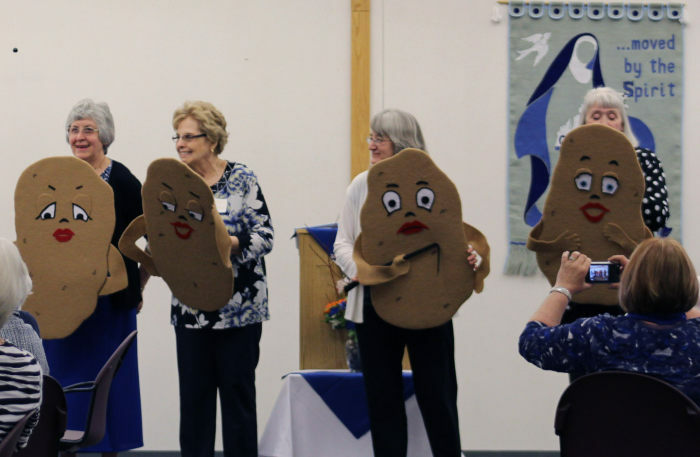 Each year, the Gaylord DCCW sponsors a Fall Workshop and a May Convention for all of Catholic women. Every three years, the Detroit Province has a convention. At the National level, a convention and an assembly are held on alternating years. The conventions are open to all Catholic women.

The Gaylord DCCW board meets four times a year - June, September, January and March. At this time, voting membership is restricted to a representative from each parish council of Catholic women who are affiliated and whose dues are paid. Each region assesses its own dues to the parishes, but welcomes all women to the meetings which occur four times a year.

Ecumenism is not an "appendix" added to traditional Church activity, but "an organic part of her life and work, and consequently must pervade all that she is and does," wrote Pope John Paul II in his 12th encyclical, titled "Ut Unum Sint" (That All May Be One). The ultimate goal of the ecumenical movement is to re-establish full visible unity among all the baptized."

Evangelization is the ministry of every active Catholic. As disciples of Jesus Christ, all Catholics have an essential role in sharing their faith and the Good News of salvation. There are several formation programs available to help parishes within the diocese to reach out to the unchurched, the alienated, or to members of their own community in a spirit of conversion, renewal and reconciliation. Contact the Office of the Bishop for more information.

The Hispanic Ministry serves to assist Hispanic ministry efforts within the Diocese of Gaylord.

The Knights of Columbus is a lay Catholic family fraternal organization dedicated to the values of charity, unity, fraternity and patriotism. Membership in the K of C is open to all practical Catholic men in communion with the Holy See, age eighteen and above. The term "practical Catholic" implies that a person accepts and abides by the Commandments of God and the precepts and tenets of the Catholic Church.

In 1852, Bishop Baraga established Immaculate Conception Church on the Leelanau Peninsula, to minister to the spiritual needs of the Native Americans. The parish, now under the patronage of St. Kateri Tekakwitha, is the designated Native American Parish for the Diocese of Gaylord. The parish also consists of Non-Native parishioners who are an integral part of parish life. Native American customs are incorporated in the Sunday Liturgies and the prayer life of the church. The drum, the heartbeat of Mother Earth, and the Native American People, is played during Sunday Liturgy. All are welcome to worship at 10:00 a.m. on Sunday.

There are also Native American Communities in Manistee, Petoskey, Harbor Springs and Burt Lake. The diocese reaches out to these communities to respond to their needs and to hear their voices. A yearly Native American Conference is held in Gaylord in the Fall. For any information or questions regarding this Apostolate, please contact the Director of the Native American Apostolate:

The Propagation of the Faith is an organization, headquarter in Rome, which distributes aid to Catholic missions and organizes the work of missionaries all over the world.

The St. Vincent De Paul Society seeks in a spirit of justice and charity and by person-to-person involvement to help those who are suffering. Financial assistance, usually of a temporary sort, such as, food, clothing, shelter, utilities and medicine may be involved in Vincentian work. Such assistance, while important, is not the Society's principal focus. The larger aim is the providing of friendship and informed help so that individuals and families may more fully realize their human dignity and potential, and may use the community resources available to them.