A Christmas Message from
The Most Reverend Steven J. Raica, Bishop of the Diocese of Gaylord

JESUS: “WORD OF THE FATHER, NOW IN FLESH APPEARING” 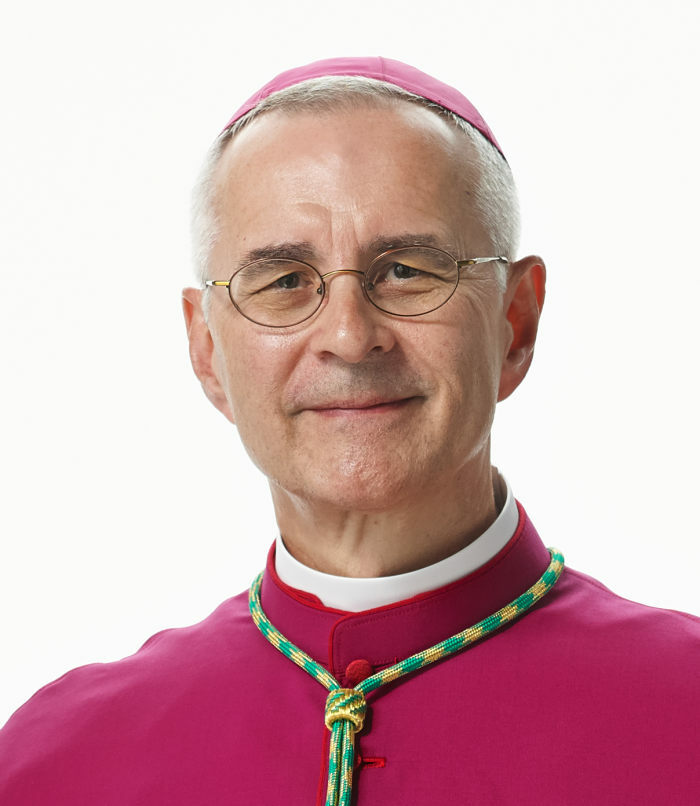 A joyful and blessed Christmas to one and all! In the familiar carol, O Come, All Ye Faithful, the third verse has these words: “Word of the Father, now in flesh appearing.”  These words sum up the very beginning of the Gospel of St. John, “The Word was made flesh and dwelt among us.” The drama of Christmas reminds us very simply that Jesus came into the world and became one of us so that we could recognize the Father’s love for us and follow Him.

All through our lives we seem to be looking for someone. Or at least we seem to be waiting to be found by that someone, even someone special.  As a child, we looked for our parents.  After all, they were known to us and that was the sum total of our known world. Their faces were familiar to us; their voices were reassuring; and their hugs and gestures of affection were comforting. Through similar gestures of my parents, for instance, I came to know who I am – found and loved, not just by them, but by God who had a plan for me. They introduced me to Jesus. In a particular way, I came to learn that I was very much loved by God who knew all about me even before I was born.

In he world in which we live today, we are aware of so much more due to television, radio and internet. Certainly the known world for me was a small village in Michigan’s Upper Peninsula. Today, by contrast, we have access to virtually everything, both good and evil. We know about violence and disruptions in the world in  an instant. We are unsettled and worried that there are ideologies bent on destroying western civilization as we know it.

But one constant remains -- who I am is not reduced to an ideology, a culture, or even the limitations of my own family and self. The Word of the Father speaks to all a word of Mercy, a Word that seeks to welcome, to lift up, to heal, to restore, to repair, to give hope and ultimately to give life. All throughout the Gospels, we hear these stories over and over of how Jesus, as the Word of the Father, made a difference in the lives of those He met – because He lived a different way. He revealed to us the Father’s tenderness, His caress, His affection for all – not in condemnation, but in an invitation to live through following Jesus, His Son.

He abides with us today fulfilling His mission to be a voice of reason, of hope, of mercy to a waiting world. So, Christmas celebrates family, celebrates life born of a babe in Bethlehem, and celebrates hope for you and me. Christianity is an event that recognizes God’s love for us in a person and invites each, in freedom, to follow. Indeed, we come to adore Him even today because Jesus is truly the “Word of the Father, now in flesh appearing.”

A very blessed and Happy Christmas and peace-filled New Year!