Nigerian Priests Invite Joy to Reign in Their Hearts 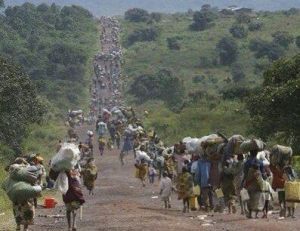 For months, Rev. Polycarp Paul Mblarawa did not know whether his mother and father were alive or dead. His parents and siblings became separated as they fled Bazza, Nigeria after the Boko Haram burned their home to the ground in September. On January 27, 2015, the priest finally heard from a relative that Fr. Polycarp's parents had been seen alive, though seriously suffering from the conditions they are facing.

The Rev. Emmanuel Finbarr Tizhe’s family is scattered. They escaped their home in Shuwa before Boko Haram attacked the village, then relocated a second time in an effort to stay ahead of the campaign of death and destruction the militant Islamists are waging upon the Nigerian people. Six-thousand miles away in the Diocese of Gaylord where he arrived in August to serve and study, Father Emmanuel uses social media to keep tabs on his family and homeland. 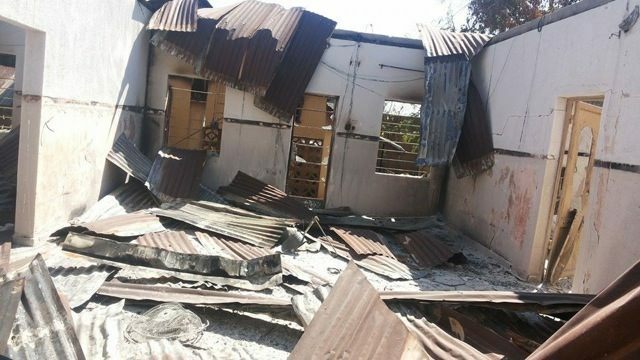 Father Polycarp was due to return to Nigeria last September, having served the Diocese of Gaylord for three years. Escalating violence in his home Diocese of Maiduguri, however, precluded that. Boko Haram ruthlessness there has resulted in more than 50 churches and chapels destroyed and more than 200 churches abandoned; more than 1,000 Catholic faithful have been killed and nearly 70,000 of the 125,000 Catholics in Maiduguri have fled their homes, according to reports from Bishop Oliver Dashe Doeme. Well over half of the 46 diocesan priests have been displaced and most of the diocese's 40 schools have been deserted. There is nowhere for Polycarp to return to service, his bishop told him. So with the blessing of Gaylord Bishop Steven Raica, Bishop Doeme requested the 44-year-old cleric remain in Traverse City and continue on as associate pastor at St. Francis of Assisi.

In spite of all this, these two priests, these men of faith invite joy to reign in their hearts.

“We must move forward with life,” Polycarp said. “God made us to be a happy people. We have to be joyful, even in the midst of fire.”

When Polycarp arrived in the States in 2011, the trouble back home distracted him even at the altar. (See related story below.) “The first three weeks I was not myself. I thought I was going to go mad,” he said. “For me it’s the injustice. Why should your fellow man say, ‘If you don’t do this, I will kill you’?” God has not given (man) rightful power to control fellow human beings.” Through prayer, Polycarp managed to temper his dispirited thoughts. 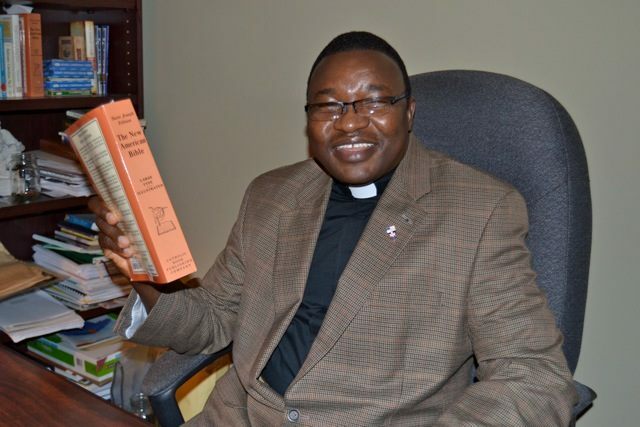 The Beatitudes and Matthew 5:43-48 hearten him, he said, reciting the latter: “You have heard that it was said, ‘You shall love your neighbor and hate your enemy.’ But I say to you, love your enemies, and pray for those who persecute you …For if you love those who love you…do not the tax collectors do the same? And if you greet your brothers only, what is unusual about that? Do not the pagans do the same? So be perfect, just as your heavenly Father is perfect.”

"It’s tough. It hits back,” Polycarp said of the command. But a true disciple of Jesus conforms to God’s will, and so he prays for both the persecuted and their persecutors. “I pray that God may touch the hearts of those who perpetrate evil, to lay down their arms and embrace peace, peace that the world cannot give. I pray for the victims, that they will have hearts of forgiveness … and move on with life.”

He asks comfort for those who are suffering. “They should not forget they are not alone,” Polycarp said. “God doesn’t abandon his people. I always believe in God’s blessings. There is hope in any situation, no matter what happens.” The readings for the second Sunday of Advent, Isaiah 40-55 and the plight of the exiled Israelites, especially resonated with Polycarp.

“(Jesus) is coming to dwell in our midst, in our lives, in our hearts,” he noted. The valleys in human hearts — sin — have taken away joy, but peace can return by preparing the way for him, he added.

Father Emmanuel’s joy is evident in his broad smile. Despite his country’s situation, he, too, maintains hope.

“The number one thing that gives me hope is that I believe God never fails. Whatever the difficulty, God prevails.

“I find my joy in the fact that, despite all the problems, God has been and is still faithful in expressing his love to us and our families and to many who believe in him. Though many have died, we are still grateful to God for his protection,” noted 39-year-old Emmanuel. “More so, I’m happy for the fact that we are persecuted not because we have done anything wrong, but for the fact that we believe in Jesus Christ. St. Paul said in Romans 8:35-39, nothing can separate us from the love of God … The greatest joy one can experience is to have Jesus as a true friend.”

The friendship and concern of the people of the Diocese of Gaylord also bolsters the priests. 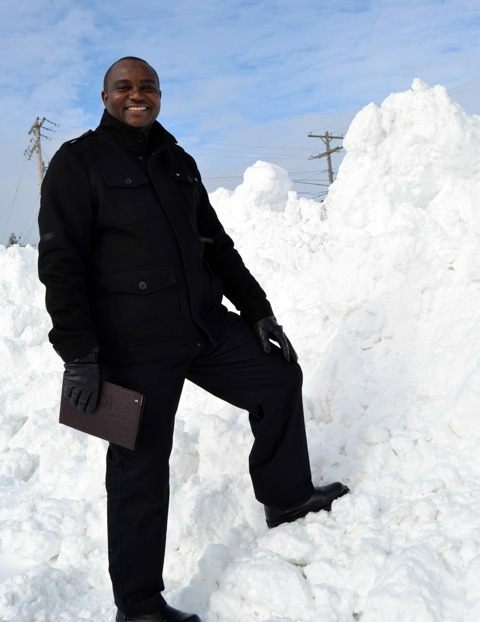 “I’m so encouraged with the people I’ve met here,” said Emmanuel, most recently appointed an associate priest at Sacred Heart in Oscoda and Holy Family in East Tawas. Parishioners, staff and clergy inquire routinely about his family and country and offer their prayers. “They show a lot of concern and are my source of strength.”

He’s even found joy in Northern Michigan’s winter weather. He experienced his first-ever snowfall — nearly 50 inches — while serving in Gaylord in November. “I was freezing and the kids were just jumping in the snow,” he laughed, a snowbank towering behind him.

This is Polycarp’s fourth Michigan winter. He said he enjoys his ministry here, and even if he is anxious to return home, as an obedient priest he will do what his bishop requests of him.

“I like challenges,” he said. He looks forward to new learning opportunities. Already he has earned his Masters of Education in Educational Leadership while here. Someday he will return to Nigeria and employ what he’s learned.

During his scheduled three-year stay here, Emmanuel will take advanced studies in negotiations and conflict resolution, skills he hopes one day to use to affect change in his homeland.

Meanwhile, he and Polycarp continue to pray.

In the course of their ministries in the Diocese of Gaylord, people frequently ask the priests what they can do to help alleviate Nigeria’s suffering.

“Encourage people to pray for us,” said Emmanuel, “because unless our leaders are able to know how bad evil has gone into our society, I don’t know when change will come.

“If we present it to God, in his own time he will do what he feels is best for us.”

Polycarp concurred. “For now let us pray and ask the Lord to strengthen their faith, to take it as it comes … many will lose their lives and suffer.”

By Chris Grosser.  Chris is a freelance writer/editor based in Gaylord and a member of St. Mary Cathedral. She may be contacted at  chris.grosser@frontier.com.

“Praise the Lord,” shouted one little girl when the Rev. Polycarp Paul Mblarawa threw open the gates of his church compound in Potiskum, Nigeria.

“Allelulia,” roared a chorus of more than 1,000 — Catholics, other Christians and Muslims who had taken refuge at St. John’s Parish when the Boko Haram attacked their village Easter week, 2011.

Nearly 1,000 Islamic militants armed with sticks, matches and gasoline swarmed outside the gate.

Though he does not consider the “Alleluia”-defense of his parish and people a miracle, Polycarp, who now serves as associate pastor at St. Francis of Assisi in Traverse City, thinks often about the incident and that young girl.

He’d been quizzing children preparing for First Communion that Easter when a woman burst in screaming, “Father, the town is on fire.”

“I saw a black, thick cloud of smoke going up in the sky. We had 23 churches of all denominations in that town,” recalled the priest. His parish, about a mile from town, was one of two that survived the carnage. It stands still today.

That day Polycarp prayed before the Blessed Sacrament. “If you allow them to burn it, it is your business,” he told God. Villagers had crowded into the church’s fenced compound. Among them was the girl — maybe 8 or 10 years old.

“She said, ‘Father, we are going to chase them away with alleluia. I will shout praise the Lord, and the people will shout alleluia’.” Their unified voices would frighten away the mob. “They are afraid, too,” she told him.

“I wondered — is it possible God is speaking through her?” recalled Polycarp, who believes he has been blessed with the gift of listening. “She’s just a kid.”

Again he knelt before the Blessed Sacrament. Perhaps God was testing his gift for listening.

He agreed to the plan. The crowd gathered rocks and stones. “I told them we are not going to pursue (Boko Haram), but if they break through and come in, you are free to descend on them. I am going to open the gate so they can see the crowd inside.”

“I had intense fear,” Polycarp said. “If it is God’s plan, if death is coming this way for all of us, we are dying for a just cause,” he’d thought.

But they did not die. Boko Haram retreated. The refugees remained on the premises more than a month. Polycarp could see God’s hand at work in the church’s stockpiled flour and water from a well recently drilled.

Within a few months Polycarp was in the United States, where he reflects often on the event.

“I see it as God’s continuous presence and intervention in the lives of his people. God speaks to us always. We will get the messages he gives us if only we can pay attention to him. I believe (the girl) got the voice and the message that came with it right at that moment and she passed it on to me.

“When I think about it,” he said, “all these happenings have really made me grow my faith stronger than before. My perceptions, my worldview of things have improved (from) these blessings.” 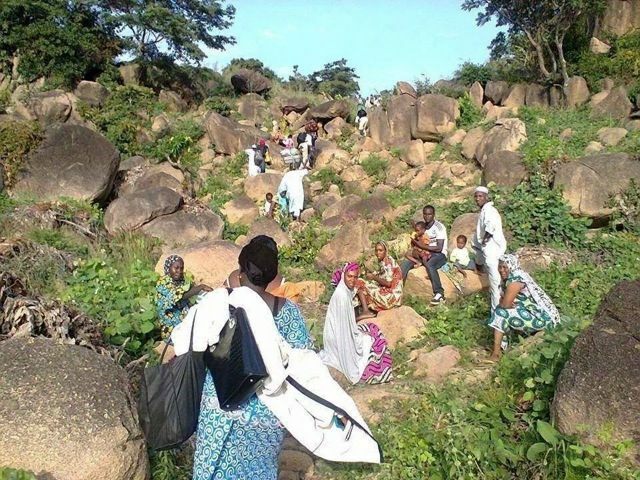 Four Nigerian priests currently serve in Northern Michigan in perpetuation of a relationship formed several years ago between the Diocese of Gaylord and the Diocese of Maiduguri, Nigeria.

Recently, Polycarp and Emmanuel took time to share some of their experiences and observations on their country’s humanitarian crisis as militant Islamists persecute Christians. Polycarp has been in the States more than three years and Emmanuel, just six months.

Chris Grosser is a freelance writer/editor based in Gaylord and member of St. Mary Cathedral. She may be contacted at t chris.grosser@frontier.com.