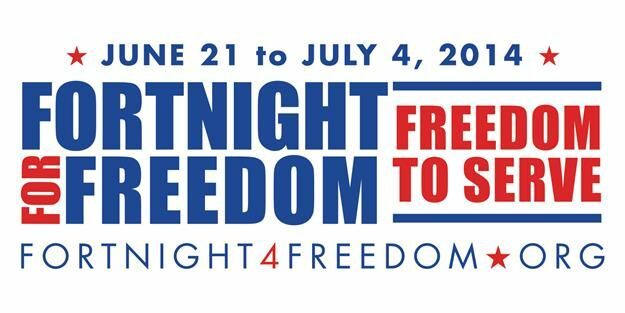 Catholic dioceses and parishes across the United States are once again encouraged to raise awareness for domestic and international religious freedom concerns during the third annual Fortnight for Freedom, June 21-July 4. The two-week celebration will focus on the theme, “Freedom to Serve,” emphasizing the link between religious liberty and service to the poor and vulnerable.

“During the Fortnight, our liturgical calendar celebrates great martyrs who remained faithful in the face of persecution by political power—St. John Fisher and St. Thomas More, John the Baptist, Peter and Paul and the first martyrs of the Church of Rome,” said Archbishop William E. Lori of Baltimore, chairman of the Ad Hoc Committee for Religious Liberty of the U.S. Conference of Catholic Bishops (USCCB). “This is a time when Catholics can unite themselves in prayer to the men and women throughout history who spread the Gospel and lived out Jesus’ call to serve the ‘least of these’ in even the direst of circumstances.”

As we approach this year’s Fortnight for Freedom, we continue to see cultural and legal attacks on religious freedom in schools, businesses, the military and religious institutions. In Michigan, recent Court rulings on the Affordable Care Act mandate and Michigan Marriage Amendment, along with religious liberty concerns both here and across the country in areas such as immigration and humanitarian services, illustrate our need as Catholics to be attentive to the issues before us, to become educated, to have the courage and resolve to engage in meaningful dialog, and to apply our faith and moral values as we make decisions.

The U.S. Conference of Catholic Bishops stated, “To be Catholic and American should mean not having to choose one over the other. Our allegiances are distinct, but they need not be contradictory and should instead by complementary. That is the teaching of our Catholic faith, which obliges us to work together with fellow citizens for the common good of all who live in this land.” (Our First and Most Cherished Freedom, A Statement on Religious Liberty, 2012)

Resources for observing the Fortnight for Freedom and fact sheets on a variety of topics have been published by the USCCB for use in parishes or for personal reflection. In addition, the Michigan Catholic Conference has just released the 2014 editions of “The Issues, The Candidates & Your Vote” and “Election Year Guidelines for Catholic Parishes and Institutions.”  Copies have been mailed to every parish in Michigan with additional copies available at no cost upon request.

Catholics may also take action by expressing their views to their representatives and senators and by signing up for legislative alerts through the Catholic Advocacy Network of the Michigan Catholic Conference and the Legislative Action Center of the USCCB.

Click here for more information and links to the materials mentioned above.