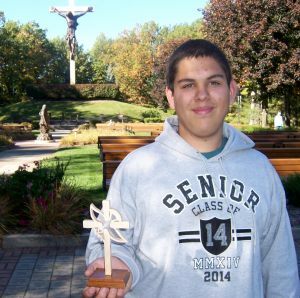 In the shadow of the 55-foot-tall crucifix hewn from a single redwood tree, altar servers at Indian Rivers Cross in the Woods parish don wooden crosses crafted by a young parishioner.

Seventeen-year-old Martin Gutierrez was happy to see the cross pendants he created from black walnut dangling from servers necks as he and his sister, Loretta, were baptized into the church last Easter Vigil. Hes fashioned three other sets of crosses  from maple, mahogany and purple heart wood  each quartet designated for a particular Liturgical season.

What started last year as a woodshop assignment for Gutierrez has blossomed into a fledgling business and an opportunity to share his talents with his parish. The Inland Lakes High School senior is reluctant to call his woodworking skills a gift.

I consider it something fun to do. I knew it would make them happy, he said, referring to his church family.

Gail Phelan believes her sons finesse with wood, however, is a gift. So does Keith Larson, catechist/youth minister/Rite of Christian Initiation of Adults (RCIA) mentor. Larson had been discussing vocations and gifts with Phelan and her children before RCIA classes one evening, noting every person has God-given gifts which often are revealed through ones work or hobbies, and could also be used in service to the church. When Gutierrez showed him the school website that showcased an intricately carved seahorse hed made in woodshop, Larson invited the youth to make replacement crosses for the altar servers worn-out ones.

Though busy with academic and religious studies, band, National Honor Society, Circle of Friends and his job at Kens Village Market, Gutierrez accepted the challenge. He selected woods for their color. He learned exotic purple heart wood shatters when dropped. He honed his skills, gaining confidence with a scroll saw  its blade not much bigger than a pencil tip  to make intricate cutouts of Jesus and the Holy Spirit on the three-and-a-half-inch crosses.

It was just beautiful, Larson said, recalling how the black walnut crosses hung from red lanyards and Jesus outline shone in the candlelight of Easter Vigil.

I enjoyed making them. It gave me something to do in class, Gutierrez said. I looked at it as a challenge, and I liked helping.

I think God had a lot of hand in it, his mother said. Everything fell into place; there was a path, I think a chosen path. You dont necessarily see the hands guiding you all the time.

Ill agree with that because when I finished making all the altar server crosses, said Gutierrez, Keith and I had the same idea to make Bishop Hebda one comprised of all four woods.

Larson, who presented Gutierrez with a lathe that had been gathering dust at his house, called the shared thought the Holy Spirit at work.

While Gutierrez acknowledged others might hold him up as an example to other youth, hes not set out to be that, he said. Its just everyday life. For him being Catholic means having somewhere I can go where everybody is the same. I go to church for church, but I also go to church for the people in the church. Meeting people like Larson, Director of Religious Education Shirley Ronk, and volunteer Danielle Meyers has inspired him. 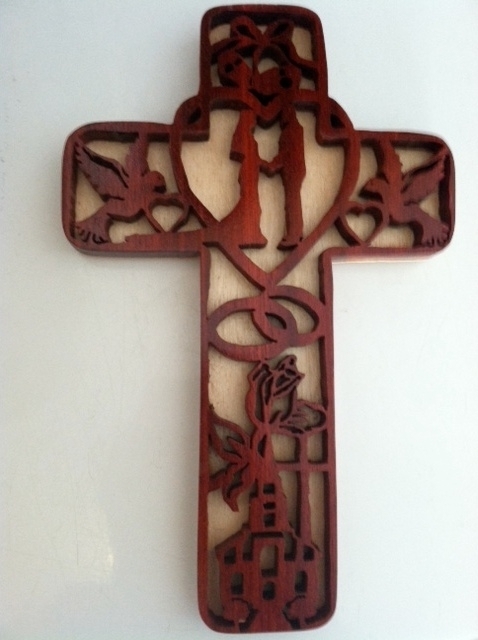 Besides crosses for altar servers and Bishop Hebda, Gutierrez has crafted several as gifts and for contracted sales and consignment. He labored 10 hours on the dense blood wood cross he made for his pastor, Fr. Mike Haney, OFM, and nearly as long on a wedding cross of the same exotic wood. He designs on the computer, modifying patterns hes found on the Internet. He also makes wooden key chains and pens.

Gutierrez, whose father José lives in Saginaw, hopes the deftness required of woodworking will serve him well as he considers a career in bioengineering, the design and manufacture of prosthetics. Hell attend North Central Michigan College in the fall with an eye on transferring to Michigan State University.

To earn money for college, hes launched a website ( http://crafters-for-college-marting.weebly.com/crosses.html ) showcasing his work. Additionally, he and a coworker at the market are organizing a collective of crafters who eventually would like to use a percentage of their earnings to establish a scholarship fund and help others.

Phelan nodded with approval. Is she proud?

 Chris Grosser is a former newspaper editor and writer based in Gaylord where she is a member of St. Mary Cathedral Parish. You can reach her at chris.grosser@frontier.com