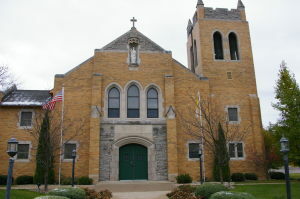 For the 168 families who are parishioners of St. Paul in Onaway, Michigan, the financial investment to maintain their aging church facilities has often been a challenge  but one they have been able to meet through prayer and sacrificial giving. Over the past few years, the faithful of St. Paul found the resources to replace 24 small and 18 large stained glass windows, at a cost of up to $7,000 each.

But then another problem came to light  the church was quickly becoming structurally unsound. Cracks in the masonry and damage to the bricks and mortar allowed for water penetration which was weakening the structure with every rain and snowstorm. Construction of the parish building was finished in 1951. So, that 60 years later the building would be in need of some restoration was not a surprise, the cost of the project however, was a bit daunting.

The estimates for the projects that needed to take place came in just shy of $50,000. Knowing the faithful would need some outside help to address the problem, Fr. Peter Eke, Pastor of the parish, enlisted the help of the diocese. Jeanne Marriott, diocesan Stewardship Specialist who also assists parishes in writing grants, suggested they approach the Catholic Extension Society (CES) for help. The two collaborated on preparing a grant request. In early 2013, the parish received notice CES had approved the challenge. If the parish could raise $30,000, then Catholic Extension would give them an additional $15,000 to help meet the goal.

The faithful at St. Paul came together , formed a restoration committee, and plans were put in place to meet raise the needed funds. In just six months the goal was achieved through a handful of private donations, extra collections at Mass (which were enhanced by gifts from seasonal visitors) and a variety of activities -- including a pig roast organized by the parish restoration committee.

Marty Osantowski, then President and Grand Knight of C ouncil #7688, said, We are blessed to have a core group of people who, when they need to dig in, they dig in!

The parish hosted a raffle for a TV, bike and some other items; a Euchre Tournament; a Swiss Steak Dinner and two rummage sales.

Sheryl Leonard, a member of the restoration committee, also had a unique idea  a Giant Salad Bar. She spearheaded event and, as an added touch, entered to have a float in a local parade that coincided with the event. Not only did the venture create a great advertising opportunity for the Giant Salad Bar, they won a prize for the Most Creative float! When asked of the significance of the funding from CES, Mrs. Leonard said, It was great incentive, and I think it is marvelous that so many people came together, not only to donate, but also to work together toward a goal  it has drawn this community even closer together.

All in all, within the short timeframe, the goal had not only been met but exceeded  the little parish with big hearts and generous souls raised over $34,000! The matching grant from Catholic Extension was processed and delivered in mid-August and the project was finished in early November.

Sally Schaar, another member of the Restoration committee noted that after the work was done it began raining for a solid week, I think it was Gods way of showing us that the work was really done right! because there was nary a drop of water or sign of a leak.

Reflecting on the restoration project, Fr. Eke, observed "I am grateful to God for the loving and open hearts we have here at St. Paul Pari sh, both amongst our parishioners and visitors . There are lots of good, selfless, and hard-working people in our pews here. I am glad that the Catholic Extension Society extended to us their generous hands for us to realize our dream, he added.  We were able to complete this project because we have good people who have a willingness to share their various God - given gifts with th e parish. The fund raising drive gave all of us the opportunity to fraternize with one another and to build unity for the common good. That itself is an added grace, and priceless."