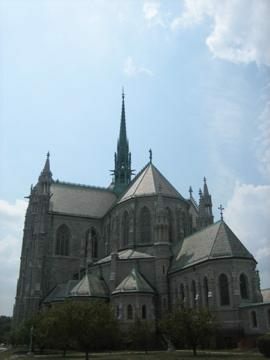 The Most Reverend John J. Myers, Archbishop of Newark, today announced to a gathering of local journalists and Archdiocesan employees and guests in the Newark Archdiocesan Center offices that His Holiness, Pope Francis, has granted his request to name a Co-Adjutor Archbishop to assist in the administration of this local Church of Newark.

The Most Reverend Bernard A. Hebda, until today Bishop of the Diocese of Gaylord, MI, was named Co-Adjutor.

In making this announcement, Archbishop Myers stated:  Today I have the personal privilege and honor of introducing Bishop Bernard A. Hebda.

Archbishop Hebda has served generously and with distinction as a priest in Pittsburgh, as a Monsignor in Rome, and as Bishop of the Diocese of Gaylord, Michigan, Archbishop Myers said. We have long known each other from his service

at the Vaticans Office of the Pontifical Council for Legislative Texts, of which I was a Consultor and now am a full Member. He lived and served at The Pontifical North American College in Rome, on whose Board I have served for some time and, in recent years, have served as Chair.

We have been friends and collaborators for years. I happily look forward to our increased collaboration for the benefit of the faithful of the Archdiocese of Newark, in the years ahead, he concluded.

Archbishop Hebda addressed the gathering by stating: If youre wondering if I am as surprised as you are by this appointment, the answer is Yes, and yet I am truly thrilled to be here to begin my service.

I am particularly grateful for the kind words of Archbishop Myers and for the presence of the Auxiliary Bishops, as well as the kindness and hospitality that they have already offered to me, he said.

I am humbled by Pope Francis confidence in calling me to this local Church, renowned for its generous pastoral outreach to those who have come to these shores and its consistently passionate response to the call to live out the Gospel, he continued.
I am also grateful to Pope Francis for providing me with the co-Adjustors cushion, an opportunity to experience the vitality of this local Church and its challenges before ever being placed at the helm.

He also added that I have known and respected Archbishop Myers for many years and welcome this opportunity to assist him as he shepherds this large and complex Archdiocese.

A Mass of Welcome for the new Co-Adjutor will take place on Tuesday, November 5 at 2 p.m. at the Cathedral Basilica of the Sacred Heart, Newark.