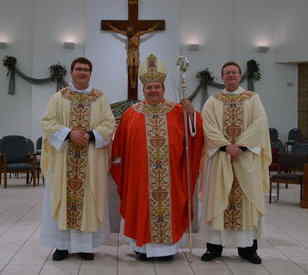 On Saturday, June 29, the Feast of Sts. Peter and Paul,  Bishop Bernard A. Hebda ordained Matthew Anthony Furgiuele (left above)  and Bryan William Medlin to the priesthood for the Diocese of Gaylord at St. Mary, Our Lady of Mount Carmel Cathedral in Gaylord. The diocese was honored to have Bishop Noel Simard from the Diocese of Valleyfield, Quebec and  Msgr. Giacomo Pappalardo and Msgr. Carmelo Pellegrino from the Congregation for the Causes of Saints in Rome, and Msgr. Christopher Schreck, Rector of the Pontifical College Josephinum in Columbus, Ohio, as special guests for the ceremony. More than 50 other priests from the Diocese of Gaylord and other parts of the U.S. and Canada also joined in the celebration, along with parishioners from throughout the diocese, deacons, religious, family members and friends of the ordinandi.

Fr. Matthew Furgiuele, the only child of Karen and the late Anthony Furgiuele, was born on September 27, 1975, and raised in Toronto, Ontario, Canada. Growing up, he spent much of his childhood volunteering both at St. Gregory parish and within his community. At age 10, he became an altar server and later began training other altar servers before he started teaching confirmation preparation classes. 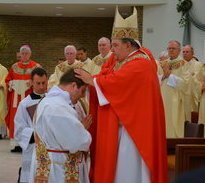 Fr. Matthew had already begun discerning the priesthood by the time he graduated from high school, but after both he and the Director of Vocations for the Archdiocese of Toronto agreed that he was too young to begin studying for such a vocation, he enrolled in the University of Toronto to pursue a degree in philosophy. He continued his education at the University of Montreal, earning a Masters in Philosophy, and then worked for the Canadian government in bioethics.

It was during a six-month sabbatical in Rome that Fr. Matthew began to reconsider the priesthood. While working at the Pontifical Academy for Life, he lived in a residence that housed clergy who worked for the Vatican and he spent a great deal of time with them and in prayer and discernment. When his sabbatical ended, Fr. Matthew decided to pursue a doctorate in Philosophy at the Angelicum University in Rome but continued to think about priesthood. That discernment led him to return to Canada to enroll in St. Augustines Seminary, as a seminarian for the Archdiocese of Toronto. As he was completing his seminary formation, his father suddenly passed away and he took a leave of absence to return home, ultimately leaving seminary formation for the Archdiocese of Toronto.

With encouragement from his friend and mentor Msgr. Pellegrino, Fr. Matthew once again returned to Rome to study Canon Law. It was there that he was introduced to one of Msgr. Pellegrinos colleagues, Bishop Bernard Hebda, and invited to the Diocese of Gaylord.

After spending some time in Northern Michigan and serving at his new home parish, Holy Childhood in Harbor Springs, Fr. Matthew was accepted as a seminarian for the Diocese of Gaylord. He has served at Sacred Heart in Oscoda, Holy Family in East Tawas and St. Mary of the Assumption Parish in Charlevoix and was ordained a transitional deacon in August 2012.

As part of his priestly formation, Fr. Matthew was sent back to Rome to complete his canon law studies, residing at the North American Colleges Casa Santa Maria.

The road to the priesthood for me has been a long one,Fr. Matthew said. I am extremely grateful to Bishop Hebda and the people of the Diocese of Gaylord for recognizing and confirming my Divine calling. I find myself more and more reflecting on the love and the mercy of God. I have a tremendous sense of peace and joy but at the same time awe and wonder about the vocation God has given me."

Bishop Hebda has appointed Fr. Matthew Parochial Vicar pro tempore for the parishes of St. Catherine in Ossineke, St. Gabriel in Black River, St. Anne in Harrisville and St. Raphael in Mikado.  In the fall, Fr. Matthew will return to Rome for two more semesters to complete his Canon Law degree at the Pontifical University of the Holy Cross. 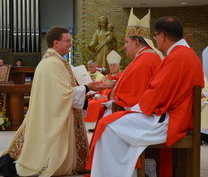 Fr. Bryan Medlin was born on May 19, 1980 in Wyandotte, Michigan, to Daniel and Debra Medlin. Early in life Fr. Bryan felt that his calling was to the priesthood and was accepted by Sacred Heart Major Seminary in 1998, at the age of 17. Realizing that he was too young and not quite ready, Fr.  Bryan left seminary one week after he arrived and enrolled in Henry Ford Community College in Dearborn. He went on to earn a Bachelor of Arts degree in History from the University of Michigan-Dearborn.

Though a native of southern Michigan, Fr. Bryans discernment process led him to the Diocese of Gaylord, an area where he had spent time hiking, hunting, and fishing. He enrolled at Sacred Heart Major Seminary in Detroit where he completed his Bachelor of Philosophy in 2008 and in the fall of 2009 Fr. Bryan began his theological studies at Pontifical College Josephinum in Columbus, Ohio.

Fr. Bryan says his roots in the Catholic Church have provided him great strength and comfort throughout his life. Before moving to Columbus, he served as Chairman of the Worship Commission at St. Joseph Parish in Trenton and as a volunteer chaplain at Oakwood Southshore Medical Center also in Trenton.

In the summer of 2010 Fr. Bryan received a scholarship to participate in The Rome Experience, an intensive six week program including lectures, coursework and cultural formation for a select group of young men each year. He was ordained a transitional deacon by Bishop Hebda on April 28, 2012.

"I am both excited and truly humbled that I will soon be ordained a priest to serve the people of God in the Diocese of Gaylord," Fr. Bryan said. "I recognize that I have been called to an awesome responsibility and I will do my best to proclaim the Gospel and help others experience the love of God and the Church. I ask for your prayers as I begin my priestly ministry."

Fr. Bryan has been appointed Parochial Vicar for the parishes of Sacred Heart in Oscoda and Holy Family in East Tawas.