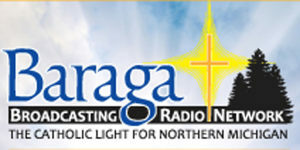 Known as the Catholic Light for Northern Michigan, Baraga Broadcasting employs just two individuals: a Chief Engineer and the General Manager. The radio station relies on approximately 40 volunteers who share their time, talents, and energy to make sure that the message of Baraga Broadcasting is spread throughout the region.

With hopes of raising enough to cover costs of operation and programming, Baraga Broadcasting and its supporters will be hosting two dinners this year. The first dinner, on Thursday, April 18, will be held at the Grand Traverse Resort in Acme. The second dinner will be the following evening, Friday, April 19, and will take place at Treetops Resort in Gaylord.

Both evenings will follow the same format. The social hour will begin at 6:30 p.m. followed by the dinner and program beginning at 7:00. p.m. The keynote speaker will be Father Mitch Pacwa, SJ, an enthusiastic supporter of Catholic Radio as a method of evangelization and education. Father Pacwa is the founder of Ignatius Productions, a Catholic media Apostolate that has made it its mission to teach and preach the word of Jesus and to educate Catholics about their faith.

Known by Catholics around the country from his appearances on EWTN, Father Pacwa has interviewed many within the Catholic community and has appeared on such shows as Threshold of Hope, The Holy Rosary in the Holy Land, and has filled in on Mother Angelica Live. Currently, he is the host of Open Line, which airs on EWTN Radio, and can be heard live on Baraga Radio on Wednesdays at 3 pm. Father Pacwa is a noted author and is bi-ritual, meaning he is able to celebrate the Maronite Mass of the Eastern Catholic Church in addition to the Holy Mass that we of the Roman Catholic Church celebrate each week.