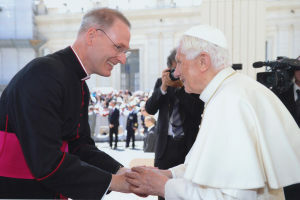 On Sunday, June 24th, the parishioners of St. Bernards in Alpena rejoiced as one of their own returned to celebrate the 25th anniversary of his ordination to the priesthood. Family and friends were excited to join Monsignor Paul Russell for morning Mass, for a Eucharistic holy hour, and for a reception at the Parish Center. Diocese of Gaylord Bishop Bernard Hebda shared that excitement, praising Msgr. Russell for his priestly example and generous service to Pope Benedict XVI and the Holy See. Its a great honor for our local Church, and particularly for the Church in Alpena, to have one of its sons so directly involved in supporting the Holy Father in his apostolic ministry.

Msgr. Russell, Pope Benedicts representative to the people and church of Taiwan, is the only son of Isabel Fitzpatrick of Alpena and the late Thaddeus Russell. He was born in Massachusetts but raised in Alpena and attended Thunder Bay Junior High and Alpena High School, graduating in 1977. He spent a year studying in France as part of the Rotary Youth Exchange Program before he realized he was being called to a special vocation, the priesthood. He returned to the United States and promptly enrolled in St. Johns Seminary in Boston, where his grandparents lived. He was ordained at the Cathedral of the Holy Cross on June 20, 1987, for the Archdiocese of Boston.

Msgr. Russell comes from a strong Catholic family and was not the first to be called to service in the Church. In fact, he is the third priest on his mothers side of the family to have come from St. Bernard Parish. In his youth, Msgr. Russell served at the altar when his cousin, Father James Fitzpatrick, was ordained. On his fathers side, his grandmothers first cousin was Blessed Michal Piaszczynski , a priest from the diocese of Lomza , Poland, martyred in a Nazi prison camp and was beatified by Pope John Paul II on June 13, 1999.

Msgr. Russells first assignment as a priest was at Sacred Heart Parish in Boston where he worked for five years extensively with the parishs youth ministry. In 1992, Russell was assigned to St. Eulalia in Winchester, but only held this position for three days before he was summoned back to the Archdiocese to act as Cardinal Bernard Laws personal secretary and as a Master of Ceremonies.

A year later, a member of Pope John Paul IIs staff in Rome was sent to Boston for surgery. After meeting Russell, he suggested Msgr. Russell consider a career in papal diplomacy. By the end of the year, Msgr. Russell was in Rome at the Pontifical Ecclesiastical Academy for diplomat training and studying for his degree in canon law at the Gregorian University.

Msgr. Russell finished his diplomat training in 1997 and was stationed in Rome at the Vatican Secretary of State for six months before being sent to the Apostolic Nunciature in Ethiopia. Since becoming a diplomatic representative for the Holy See, Msgr. Russell has served at the Apostolic Nunciatures in Turkey, Switzerland, Zimbabwe and Nigeria. In 2008, he was assigned as Chief of Mission in Taipei, Taiwan, where he currently serves.

Though he has traveled extensively and has served as some of the most exotic places in the world, Msgr. Russell will always call Alpena home. Msgr. Russell said he returns to Alpena as often as he can and keeps the people of St. Bernards and Alpena in his prayers always.

There is an African Proverb which really articulates my feelings for this place, Msgr. Russell stated.  No matter how far a river flows, it always remains connected to its source. 