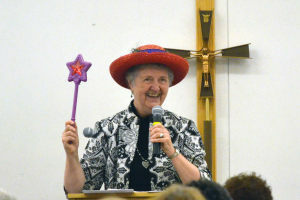 Laugh for the health of it! was the message that Sr. Susanne Tracy, OP, shared with the 135 attendees of the 40th annual Diocesan Council of Catholic Women (DCCW) convention in Gaylord on May 16. Sr. Sue, a Dominican Sister who serves as an oncology chaplain at Spectrum Health, is a four-time cancer survivor who travels the country delivering messages of laughter and hope. Her talks have become so popular that she was invited to speak at the 2012 Grand Rapids LaughFest along with well-known comedians like Whoopi Goldberg, Martin Short, and Kevin Nealon.

Keeping a good sense of humor is the glue that keeps us hoping and coping, she told the crowd. Drawing on her own experiences as a cancer survivor, middle and high school teacher, and vocations director (including in the Diocese of Gaylord while she was serving at parishes in Hale and Whittemore), Sr. Sue mixes her stories with humor and catchy sayings to successfully get her point across. Laughter is the closest thing to the grace of God, she quoted.

Complete with songs, props and a light up princess wand, Sr. Sue explained to the women of the DCCW exactly why she thought the organization has lasted 40 years: Dedication. Choosing a word or phrase for each of the ten letters in the word dedication, Sr. Sue described the DCCW as not just a cozy club of good women, pointing out that they were not just sittin around, twiddlin your thumbs waiting for someone else to do something.

Citing their penchant for getting involved with various projects within their respective communities, Sr. Sue attributed the DCCWs ruby milestone to their enthusiasm for God, openness to new ideas, and Christ-centered beliefs for bringing these women from across the diocese together. Christ is our springboard and common ground, Sr. Sue told the women.

Before the keynote speaker took to the podium, Monsignor Francis Murphy shared a few stories from his many years as the Spiritual Advisor to the DCCW. Appointed in 1979, Msgr. Murphy has supported and advised the DCCW through changes both within the organization and the diocese. Msgr. Murphy had also worked with Sr. Sue when she served in the Diocese of Gaylord.

The afternoon session included the annual business meeting along with the election and installation of new officers. Current President Kathleen Melville-Hall was reelected, as were first Vice President Marcia Albosta, second Vice President Angie Yarch, and Treasurer Gloria White. Sidney Martin is the only new addition to the board, replacing Lorraine Aurand as the boards secretary. DCCW officers serve a 2 year term and meet monthly in various parishes throughout the diocese.

For more information on the DCCW or how you can be involved, visit the DCCW website.