On Saturday, April 28, 2012, Bishop Bernard A. Hebda ordained seminarians Chet Collins and Bryan Medlin to the Transitional Diaconate for the Diocese of Gaylord at St. Mary Cathedral. A deacon is an ordained minister of the Catholic Church and serves in the ministries of charity, liturgy and the word. Transitional deacons are those men who are pursuing ordination to the priesthood. 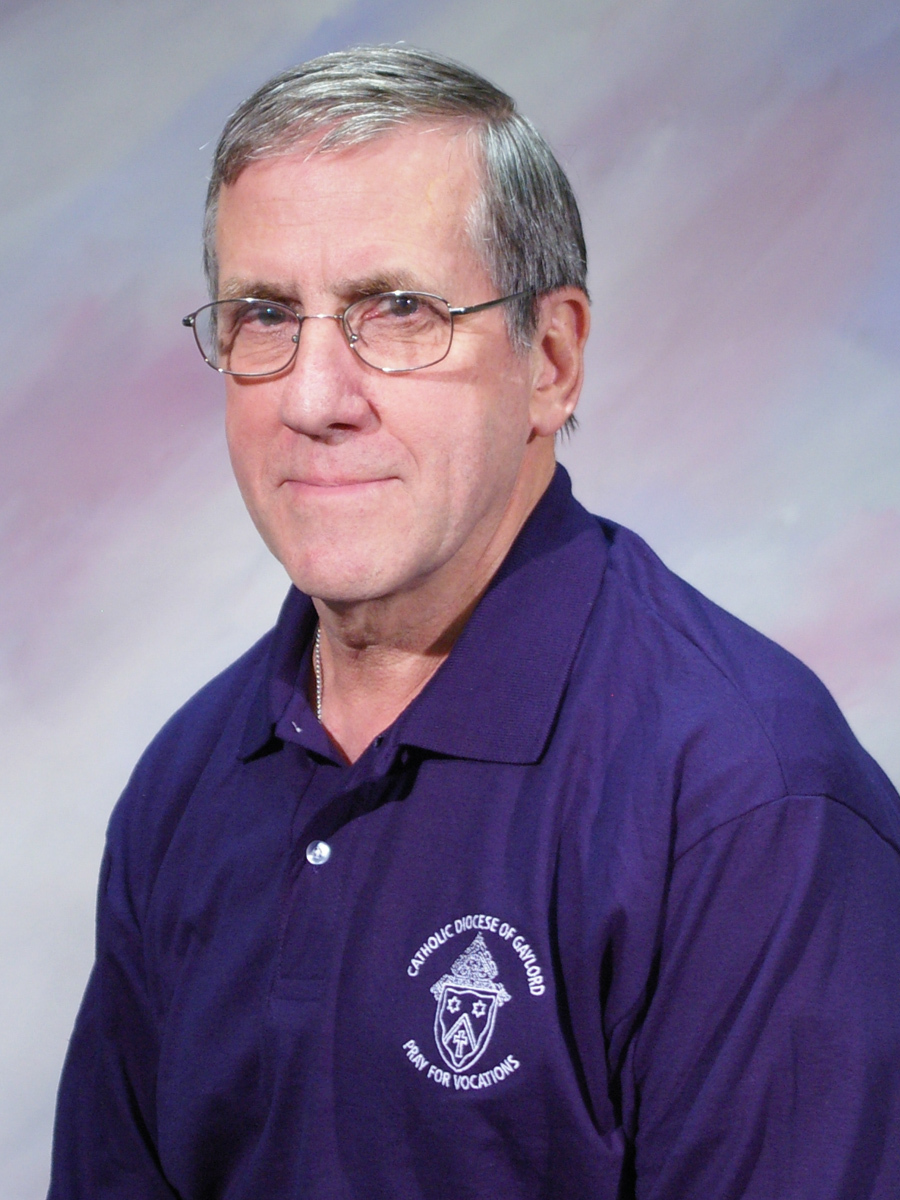 Chester Lewis Collins, known as Chet, was born on September 15, 1945, at St. Joseph Hospital in Flint, Michigan, to Lewis and Gladys Collins. By Chets fourth birthday, the family had decided to move north to Gaylord, living in a one room cabin on Big Bear Lake while building a home on the weekends.

Chets older sisters, Joyce and Barbara, attended St. Mary Catholic School and after dropping off his sisters, Chet and his mother would attend the daily Mass at the church next to the school. It was there, Chet recalls, that attending daily Mass became a goal in his life. As a child, Chet expressed his interest in religious life by performing Masses for the congregation of his grandfather and little brother, Vern, from his homemade altar set with statues and other religious figures.

Chet graduated from Central Michigan University in 1968 with a Bachelor of Arts Degree in Geography. Following his graduation, he embarked on a journey of discernment that would lead him to experience life as a seminarian for the Diocese of Grand Rapids (being that Gaylord was then in the Diocese of Grand Rapids), then to the Franciscan Friars of the Assumption BVM Province in Pulaski, Wisconsin and ultimately back to Gaylord as a seminarian. In the interim he attended Mt. St. Paul College in Waukesha, WI, St. Meinrad College in St. Meinrad, IN, and St. Johns Seminary in Plymouth, MI, but discerned that the Lord was not at that time calling him to priesthood.

He also served five years as a United States Navy Officer, several years as a teacher, and traveled across the United States working several temporary jobs. By 1987, Chet had returned to Gaylord and began his career with the United States Postal Service. Chet remained in that position until his retirement in 2009, and stayed active in the Church.

In May of 2004 he became a candidate for the Secular Order of Franciscans and after 18 months of formation made his profession becoming a member of Our Lady of Carmel Fraternity in Lewiston, Michigan. .

It was on January 2, 2010,when Chet and his mother took home the Vocations Prayer Chalice from St. Mary Cathedral that he began to reconsider his call to priesthood. That same day, a couple asked him if he had considered going back and finishing his seminary studies, which was exactly the reason I had signed up to take the Chalice, though I figured [the Diocese] would not even consider me because of my age, Chet said. That discussion led to meetings with Fr. James Bearss, the parish priest, as well as Fr. Don Geyman, the Vocations Director and Bishop Hebda. He was accepted to Sacred Heart School of Theology in Hales Corners, Wisconsin that fall.

Chet especially credits Bishop Hebda and Vocations Consultant Dr. John Olesnavage in guiding him in his discernment process which has led him to this point in his life. They have helped me in my self- confidence and to accept myself as God made me. God makes us all different for a purpose and if we allow Him, He will make that purpose fruitful. Chet said. I have learned to put everything into the Lords hands and trust that He will lead me in the direction He wants me to serve Him. 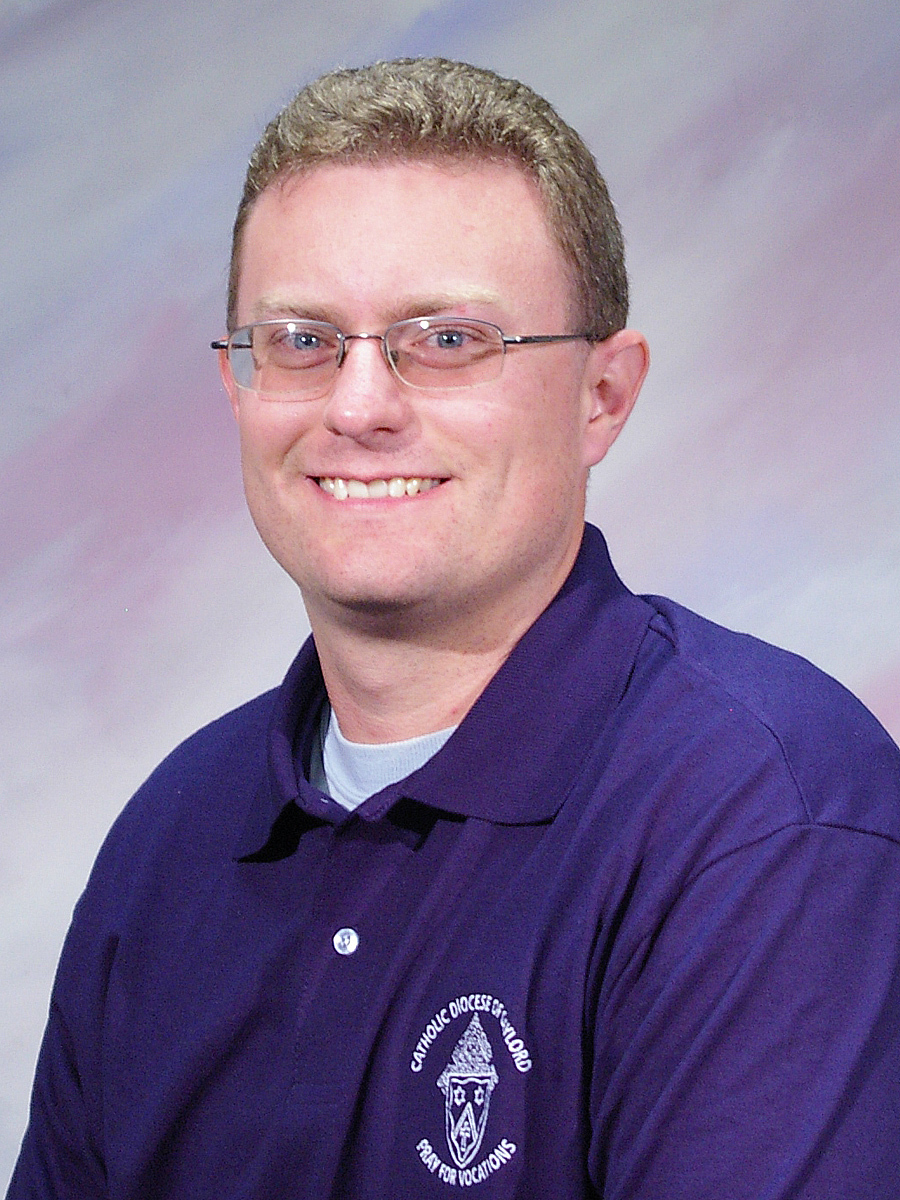 Bryan William Medlin was born on May 19, 1980 in Wyandotte, Michigan, to Daniel and Debra Medlin. Early in life Bryan also felt that his calling was to the priesthood and was accepted by Sacred Heart Major Seminary in 1998, at the age of 17. Realizing that he was too young and not quite ready, Bryan left seminary one week after he arrived and enrolled in Henry Ford Community College in Dearborn. He went on to earn a Bachelor of Arts degree in History from the University of Michigan-Dearborn.

Though a native of southern Michigan, Bryans discernment process led him to the Diocese of Gaylord, an area where he had spent time hiking, hunting, and fishing. He enrolled at Sacred Heart Major Seminary in Detroit where he completed his Bachelors of Philosophy in 2008 and in the fall of 2009, Bryan began his theological studies at Pontifical College Josephinum in Columbus, Ohio.

Bryan says his roots in the Catholic Church give him strength and comfort. Before moving to Columbus, he served as Chairman of the Worship Commission at St. Joseph Parish in Trenton and as a volunteer chaplain at Oakwood Southshore Medical Center also in Trenton. In his spare time, he enjoys hiking, bike riding and playing the piano.

In the summer of 2010 Bryan received a scholarship to participate in The Rome Experience, an intensive six week program in the Eternal City including lectures, coursework and cultural formation for a select group of young men preparing for the priesthood each year.

I was able to see the tombs of people like Pope John XXII, St. Monica, St. Catherine of Siena, and so many more, Bryan explained. My favorite part was going into the catacombs where the early church praised the Lord in the midst of their persecution. I was in awe over all that I saw and am humbled to have walked where the saints of the past and present trod.

As he prepares for his ordination to the diaconate, the next step in his priestly formation, Bryan says, My life experiences have made me a better human being and formed my conscience. I love the Church and I look forward to the day I can serve the people of God as a priest.

On the eve of the Ordination, seminarians of the Diocese of Gaylord led a Vespers Service in thanksgiving to God for the gift of Chet and Bryan as well as to pray for vocations at St. Thomas of Aquinas Church in Elmira.