Bishop Bernard Hebda ordained two men deacons for the Diocese of Gaylord during special liturgies earlier this month. Deacon Joseph Ortega was ordained at St. Francis Xavier Parish in Petoskey on June 11 and Deacon Peter Wigton was ordained on June 12 at Holy Rosary Parish in Cedar. Now transitional deacons, both men are continuing their discernment and formation as they prepare for ordination to the priesthood.

Deacon Joe Ortega was born in Evergreen Park, Illinois (outside Chicago) to Thomas and Suzette Ortega. He is the oldest of three children, having one brother and one sister. Joe attended school in Tinley Park, graduating from Andrew High School in 2001. That fall he began attending St. Joseph College Seminary of Loyola University, graduating in 2005 with a major in Communications. He then enrolled at University of St. Mary of the Lake / Mundelein Seminary and graduated this May with his Master of Divinity degree.

Originally, Joe began discerning his call to priesthood with the Archdiocese of Chicago, but after completing his clinical pastoral education at Northwestern Memorial Hospital in the summer of 2008, decided see where else God might be calling him to serve. That fall Joe worked as a teachers assistant for mentally handicapped children for nine months.

At this special needs school God taught me the value and purpose of faith even when I had more bad days than good ones, Joe said. Whenever I was feeling lost or frustrated with some of my students, God instructed me to accept every circumstance and person with a great deal of patience and forgiveness.

After a period of discernment, Joe decided to return to finish his studies for the priesthood.

Ortega explained his connection to northern Lower Michigan: The priest who brought me to the Diocese of Gaylord was Fr. Rolando Silva who is now serving in Alpena, he said. Back in 2005 when I first became a seminarian at St. Mary of Lake Mundelein Seminary in Illinois, the Holy Spirit initiated a long term spiritual friendship between the both of us. Truly, if it wasn't for Fr. Rolando helping me grow as a responsible disciple, my vocation to the priesthood would have derailed.

He rejoined Mundelein Seminary in the fall of 2010. The following year Fr. Don Geyman helped him as he Joe discerned his call was to the Diocese of Gaylord.

He spent his pastoral year at St. Francis Xavier Parish in Petoskey with Fr. Dennis Stilwell as his spiritual mentor. Joe credits Fr. Denny and the time at St. Francis as helping him to grow as a disciple of Jesus. Gradually, the movements of the Holy Spirit began to stir within Joes heart, a profound calling to serve the People of God here in Northern Lower Michigan.

As I prepare my next step to receive the Sacrament of Holy Orders, I feel so blessed to have met Bishop Bernard Hebda, along with a terrific vocation committee board, that gave me the spiritual tools necessary to help build up my vocation, explained Ortega.

Joe is scheduled to be ordained to the priesthood in December of this year. 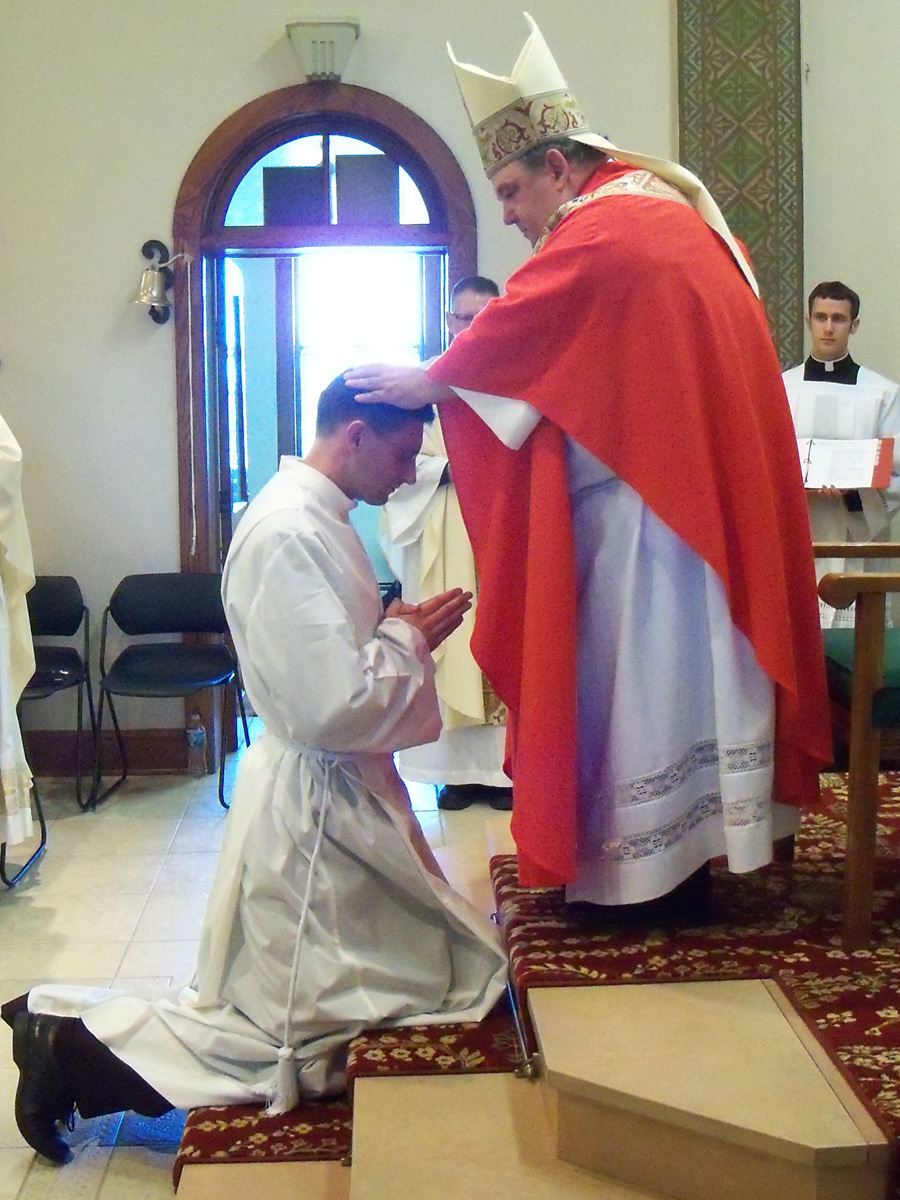 Deacon Peter Wigton grew up in northern Lower Michigan, the fifth child of ten siblings. The son of Doug and Janice Wigton of Cedar, Peter attended Holy Rosary School in Cedar and graduated from St. Mary, Lake Leelanau. While in high school he became involved in sports and school politics.

After high school, Peter attended the Franciscan University of Steubenville. He originally enrolled in business courses, but after one semester, switched to Humanities and Catholic Culture and Theology. While in college, Peter spent several semesters studying abroad. Each location was a very spiritual experience for him. By the end of his junior year, he felt a call to the priesthood.

I remember when I first heard the call to the priesthood I was overwhelmed to think God was calling me to such a huge task. I felt so small and unable, Peter said. One of the most helpful lines that Ive heard from a few other seminarians and from formation is that God does not call the qualified, he qualifies the called. So really as I approach the diaconate, even though it has been seven years now since God called me, I still remain in awe and wonder at what He is about to do.

After this graduation from Franciscan University in 2005, Peter began a serious vocational search. He decided to join the Friars Minor of Mary Immaculate in Rome and remained with them until May, 2008, having made temporary vows in May, 2007. Early in 2008 Peter felt he was being called to the diocesan priesthood. Working with his spiritual director in Rome, he decided that he would ask for a dispensation from those vows and was ultimately was accepted as a seminarian for the Diocese of Gaylord.

One of the aspects of priesthood that I look forward to is preaching and teaching the faith, Peter said. It is a very humbling thought when faced with the duty to pass on faithfully and without error the teachings of Christ and his Church. Its a huge task and I must prepare well, but its definitely something that Im passionate about doing.

Peter attends the Pontifical College Josephinum in Columbus and will return this fall for his final year. He is expected to be ordained to the priesthood for the Diocese of Gaylord in June, 2012.

Please continue to keep both men in your prayers as well as those other men and women who are discerning their own vocations and how God is calling them to serve God and the Church.