Week of Prayer for Christian Unity 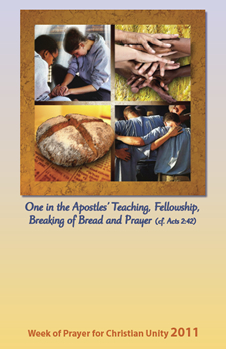 Each year at this time, the worldwide observance of the Week of Prayer for Christian Unity takes place. This practice was begun in the Episcopal Church at Graymoor in New Yorks Hudson Valley by Father Paul James Wattson who co-founded the Franciscan religious congregations comprising the Society of the Atonement with Lurana Mary White.

One of Wattsons supporters, Reverend Spencer Jones, a rector of the Church of England, had suggested that a day of prayer for Christian unity be observed every year on the feast of St. Peter (June 29); instead, Wattson proposed the idea of a Church Unity Week beginning with the Feast of the Chair of Peter (at that time January 18) and ending on the Feast of the Conversion of St. Paul (January 25).

First observed in 1908, Church Unity Week was eventually called Church Unity Octave. since there were eight days between the two feasts. In the 1930's, the name was changed to the Chair of Unity Octave to emphasize the role of the papacy in the union of the Christian churches.

With the Second Vatican Council, 1962-65, an increasing number of Roman Catholics joined with their fellow Christians, and continue each January in common prayer for unity. By 1991, an observance called Ecumenical Sunday had become integrated into the week now known as the Week of Prayer for Christian Unity.

Each year a theme and texts are prepared by an international group who are appointed by the Faith and Order Commission of the World Council of Churches and the Pontifical Council for Promoting Christian Unity, and complementary artwork is created. The theme for the 2011 Week of Prayer for Christian Unity is One in the Apostles Teaching, Fellowship, Breaking of Bread and Prayer. It comes from Acts Chapter 2 versus 42. Materials and resources to help celebrate this week were originally prepared by Christians in Jerusalem, who chose the theme to reflect back to the origins of the first church in Jerusalem; it is a call for inspiration and renewal, a return to the essentials of the faith; it is a call to remember the time when the church was still one.

Within this year's artwork the four elements of the 2011 theme are depicted: the Word as passed on by the apostles, fellowship or koinonia which was an important mark of the early believers whenever they met together, the 'breaking of the bread as it remembers the New Covenant which Jesus has enacted in his suffering, death and resurrection and the offering of constant prayer. These four elements are the pillars of the life of the church, and of its unity.

The Joint Working Group wished to give prominence to these basic essentials in our prayers to God for the unity and vitality of the church throughout the world. The Christians of Jerusalem have invited their sisters and brothers around the world to join them in prayer as they struggle for justice, peace and prosperity for all people of the land.

As the Diocese of Gaylord continues to celebrate its 40th Anniversary, Catholics in northern Lower Michigan are encouraged to continue to pray, learn and work together to promote understanding, heal divisions and serve those in need. In observance of the Week of Prayer for Christian Unity, the Alpena LARCC (Lutheran, Anglican, Roman Catholic, Congregational/UCC churches) will sponsor an Ecumenical Celebration of the Word of God on Wednesday, January 19, at 7:00 p.m. at St. Bernard Church in Alpena. Bishop Bernard Hebda will deliver the homily. Everyone is invited to the service which will be followed by a reception in the Parish Hall.

Materials for observing the Week of Prayer for Christian Unity are available on the Vatican's website and from the Graymoor Ecumenical and Interreligious institute.