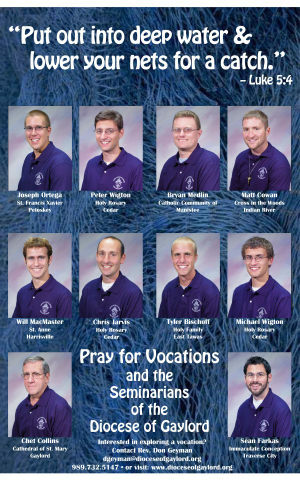 Seminarians for the Diocese of Gaylord have returned to school and resumed their studies while here at home parishioners continue to pray for them and for others who are being called to the priesthood or consecrated life. To assist in that endeavor the Vocations Office has distributed the 2010-2011 Vocations Poster to parishes, schools and Knights of Columbus councils throughout the diocese.

This years poster continues the theme of being Fishers of Men. It encourages each of us to Put out into the deep water and lower your nets for a catch (Luke 5:4) and to Pray for Vocations and the Seminarians of the Diocese of Gaylord. The poster features photos of each of the current seminarians preparing for priesthood for the diocese set against a backdrop of a fishing net.

We were pleased to see the number of seminarians for the Gaylord Diocese increase to ten as we entered the current fall semester, said Fr. Don Geymen, Director of Vocations. This is a sign of a renewed vocations awareness in the diocese, and of the effort and prayer of so many of the faithful.

The home parish of each seminarian is also noted on the poster. Men who have found their call has brought them to northern lower Michigan from other areas are assigned a home parish within the Diocese of Gaylord.

Joseph Ortega, St. Francis Xavier, Petoskey who is studying at St. Mary of the Lake Mundelein Seminary in Mundelein, Illinois.

Matt Cowan, Cross in the Woods, Indian River, has begun his theological studies at Pontifical North American College in Rome having graduated with his bachelors degree this spring from Pontifical College Josephinum in Columbus.

More than the numbers, we are excited about the quality of the men. They are enthusiastic, joyful, and committed to generous service in the vineyard of the Lord, Fr. Geyman added. And while we are happy to have two wonderful men from other places, we are especially pleased that eight of the ten seminarians are from our own diocese. That is a welcome development and another sign of God's bounty.

Features on each of the seminarian will appear in future issues of the Catholic Weekly. Brief biographical background information on each of the men preparing for priesthood for the Diocese of Gaylord, as well as additional information regarding vocations, is available here. Individuals who are discerning whether they are called to priesthood or religious life, as well as those who are interested in getting involved with vocations efforts are also invited to call Fr. Geyman at 989.732.5147.