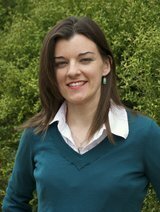 Katie Diller went through her undergradute and postgraduate years in college thinking she was going to have a career in genetics. However, as she was pursuing her studies, the Onaway native kept getting the feeling that she was meant to do something else.

"I couldn't shake the sense that I was meant to serve the Church," Diller said.

That feeling eventually led to her current position as campus minister at St. John Catholic Church and Student Center in East Lansing, on the campus of Michigan State University. For Diller, it is a return to her undergraduate roots, as she graduated from MSU in 2004 with a major in molecular biology.

Diller' s faith life began as a child. She attended Mass at St. Paul Catholic Church in Onaway, and went to elementary school at St. Ignatius in Rogers City, where her mom worked as an elementary school teacher.

"Having my mom as a Catholic school teacher showed me that those who taught in the Catholic school system made a lot of sacrifices," she said. "The teachers I had loved that they were able to preach the Gospel through their actions."

In addition to her mom, Diller said her grandmother was also "a great influence" on her faith life.

While attending St. Paul, Diller said she got to know Fr. Dale Magoon, whom Diller said recently celebrated his 50th anniversary as a priest.

"We loved him -- he was grandfatherly," Diller said. "We would turn our clocks ahead in our home so that we got to church early on Saturday when we were altar servers."

Diller said when she entered high school, she became involved in the youth group at St. Paul and it was during those years that another priest, Fr. Charlie Donajkowski, helped her deepen her faith from having a childlike faith to looking at it with adult eyes and with a greater appreciation.

Diller entered MSU in 2000 and became involved in what was then known as St. John Student Parish. She led retreats and liturgies, lectored, and was an RCIA sponsor.

"When I got down here, I was excited to get to know other Catholic friends," she said. "I made the best friends of my life."

After her college graduation, Diller said she struggled with pursuing a doctorate or doing some service work for the Church. She eventually enrolled in the Alliance for Catholic Education program through which about 200 recent college graduates gather at the University of Notre Dame to study for a master's degree in education. Upon completion, students are sent throughout the country to teach in Catholic schools that are struggling financially or in poor communities.

Diller taught high school chemistry for two years in Phoenix while living in a small Christian community. She said at the end of her second year of teaching, her mindset was that it was time to get a real job, so she enrolled in a doctorate program at Yale University in Connecticut. It was while attending Yale, she read a book titled "My Life with the Saints," by Fr. James Martin, a Jesuit priest who left medical school to become a Jesuit. It inspired Diller to follow her heart and enroll in a theology program at the University of Dayton in Dayton, Ohio. There she worked toward her master's degree in Theology and learned how to become a college campus minister, learning about adolescent development needs.

Diller said since starting her job at MSU this summer, she has dealt a lot with students who are encountering dating issues -- "working through the minefield that can be dating." In addition, she said a great deal of Catholic students come to her with questions about integrating their studies with their faith life.

"It would shock most people to learn that young adults think about their faith, career, and family, and how they fit together," she said.

Diller also said she deals with several male college students that question whether they are called to the priesthood or religious life. She said those students often find that while their friends support their spiritual journey, the students are afraid to discuss the issue with their parents.

MSU Catholic students also reach out to serve the less fortunate. One way, Diller said, is by taking part in mission trips across the United States and in countries such as Mexico and Guatemala during spring break. Diller said between 80-100 students take part in such trips each spring.

Diller said a unique aspect of MSU's 47,000 student population is that more than 12,000 identify themselves as Catholic  a constituency which is larger than the total number of Catholic students attending the University of Notre Dame. She said the biggest challenge she faces is reaching out to those Catholic students who don't think they need to go to church.

To help reach out to Catholic students who need to bolster their faith life, Diller and Fr. Joe Krupp at St. John have started the program, "Cup of Joe with Fr. Joe," in which Diller and Krupp visit students on campus, getting to know them on a personal basis.

"That's how we get them in the door," Diller said.

She added parents can do their part to help college students develop a deeper faith life by asking them if they are involved with the student parish at their university.

"Parents should know that even when their students are in college, it makes a big difference if their parents care," Diller said. "There's a student parish at almost every major university, where they can get involved and meet some great people."