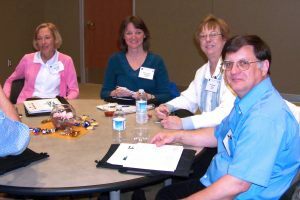 The Diocese of Gaylord was well represented at a recent workshop in Grand Rapids as the United States prepares to receive the 3rd Edition of the Roman Missal. Hosted by the Diocese of Grand Rapids at their Cathedral Square Center, the workshop was one of 22 being held throughout the country over the coming months on the implementation of the revisions to the English translation. The translation, which will be used in all English speaking countries, was granted the recognitio by the Holy See earlier this year, though it is still undergoing final editing by Vatican officials. It is expected to be forwarded to the Conferences of Bishops this spring, at which time it will be prepared for publication. The current expectation is that actual use of the revisions will not begin until late in 2011. Pope John Paul II announced a revised version of the Missale Romanum during the Jubilee Year 2000. Among other things, the revised edition of the Missale Romanum contains prayers for the observances of recently canonized saints, additional prefaces for the Eucharistic Prayers, additional Votive Masses and Masses and Prayers for Various Needs and Intentions, and some updated and revised rubrics (instructions) for the celebration of the Mass. The English translation of the Roman Missal will also include updated translations of existing prayers, including some of the wellknown responses and acclamations of the people. Thirty-two priests, diocesan and lay leaders from the Diocese of Gaylord, the second largest contingent in attendance, participated in the workshop sponsored by The United States Conference of Catholic Bishops Committee on Divine Worship and the Federation of Diocesan Liturgical Commissions. The primary speaker was Rev. Msgr. Anthony Sherman, Executive Director of the U.S. Bishops Secretariat on Divine Worship. During the first session, Msgr. Sherman traced the history and background of all three English translations of the Roman Missal, focusing particularly on the Third Edition. He explained the process as a highly consultative work among several groups including the International Commission on English in the Liturgy (ICEL), the Conferences of Bishops of the English speaking nations and ultimately the Vaticans Congregation for Divine Worship and the Discipline of the Sacraments. The process, while exhaustive and long, helps to ensure that the translation is an accurate interpretation of the prayers of the entire Roman Catholic Church. Even though the universality of the Catholic Church is often acknowledged, the concept was brought home to some attendees with this concrete example of translating texts. I never really thought about the fact that the English translation was used in countries such as India, Ireland, Pakistan and South Africa, noted one participant. I was just thinking about the United States, and maybe Canada and England. Of course, translations of the Roman Missal for other languages are also underway. In the second session, Msgr. Sherman detailed a number of the anticipated changes, with the caveat that we dont really know yet exactly which changes have been accepted. We wont know that until we actually receive the text, he said. Some of the changes simply go back to language used in the first English translation from 1969. Session three of the workshop focused on particular changes for the priests as they preside at Mass, along with music and chants of the Roman Missal. Those gathered had the opportunity to experience and practice some of the chants, more of which will be used when the revisions are implemented. The fourth session of the day was devoted to understanding and leading change. Using a three phase process of transition which discussed endings, the neutral zone (or in-between time), and the new beginning, participants were encouraged to spend time planning and preparing for the transition. Individuals deal with change in various ways. Parish and diocesan leaders will need to spend time reflecting on how best to assist their faith communities during the transition. The final session offered some guides to implementing the Third Edition of the Roman Missal. Msgr. Sherman explained that the time before the recognito was a time of remote preparation. Now we have entered the time of proximate preparation, he said. We need at least one year of catechesis and preparation time for the people before we actually start using the new translation. So, we have now moved into that next phase. Upon receiving the news that the English translation was nearly completed, His Holiness Pope Benedict XVI expressed his happiness while also emphasizing the need for a gradual introduction of the revision with "due sensitivity" and accompanied by catechesis. His hope is that "in this way any risk of confusion or bewilderment will be averted, and the change will serve instead as a springboard for a renewal and a deepening of Eucharistic devotion all over the English-speaking world." The U.S. Conference of Catholic Bishops echoed the Holy Fathers prayer, stating they hope this will "be a time of deepening, nurturing, and celebrating our faith through our worship and the celebration of the Sacred Liturgy." The Diocese of Gaylord has already begun local training sessions in an effort to help teach the teachers -- those who will assist in the preparation and formation of the faithful. More information on those efforts will be highlighted in future articles. The USCCB has launched a website devoted to the Roman Missal Third Edition which includes a great deal of helpful information for those interested in learning more. Log on to www.usccb.org/romanmissal.