Seminarian Bryan Medlin will participate in "The Rome Experience" 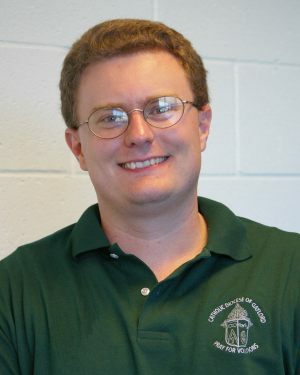 Bryan Medlin, one of the seminarians for the Diocese of Gaylord who is currently studying at the Pontifical College of the Josephinum, has been accepted into The Rome Experience. This six-week intensive summer program seeks to help seminarians build strength of purpose, teach them how to live a practical spirituality, and create a strong pattern of ongoing intellectual formation focused on the most recent teachings of the Magisterum. Running from May 23  July 3, 2010, the program will provide spiritual, intellectual, and cultural formation. This year the program will also incorporate the International Meeting for Priests in Rome, which concludes the special Year for Priests, inaugurated by Pope Benedict XVI on June 19, 2009. Bryan had asked if we could find some kind of spiritual formation program that he could participate in this summer, Fr. Donald Geyman, Director of Vocations for the Diocese of Gaylord said. We had been looking at some options when Bishop Hebda suggested The Rome Experience. I think its going to be a wonderful opportunity for Bryan, Geyman added. The program will begin with a five-day quiet spiritual retreat at the Monastero SantAntonio in Norcia, Umbria, the birthplace of St. Benedict, focusing on Christs presence in the Eucharist as the source and summit of the priestly life and emphasizing contemplative prayer, the lectio divinia, and the celebration of the liturgy. Seminarians will also have the opportunity to participate in some of the Latin liturgical celebrations with the Benedictine monks from the Monastero di San Benedetto. The Rome Experience also offers a variety of courses accredited by the Pontifical University of the Holy Cross. These courses are oriented to provide a greater understanding of the Church and its early history, along with the foundations of the Roman Liturgy, and are designed to help the future priest develop a strong, theological foundation for his pastoral mission to the lay faithful, to help him seek holiness in the middle of the world, and to be leaven in society. The specific courses that the seminarians will take include:

In his announcement of the Year for Priests, Pope Benedict XVI said, It is important to encourage priests, especially the younger generations, to a correct reading of the texts of Vatican Council II, interpreted in the light of all the Churchs doctrinal inheritance. Pope John Paul II taught that it was not economic or political ideas that primarily changed history, but rather it was the culture based on strong religious values. The City of Rome offers unique insights into how Christianity has shaped the last 2000 years of western culture. The Rome Experience will incorporate bi-weekly excursions to key artistic, architectural, and historical sites that symbolize the formative aspects of Catholicism. Before these excursions, the seminarians will be given presentations by experts in the various disciplines so that the sites may be more deeply understood and appreciated. Tours will include the Tomb of St. Peter; St. Peters Basilica; Basilica St. Mary Major; Basilica of St. John Lateran; and Basilica of San Clemente. On a daily basis, the seminarians will follow a schedule that is meant to replicate as closely as possible the actual life of a priest which includes well-balanced meals, exercise, sufficient sleep, some entertainment, and between two and three hours of daily prayer. Each week, the class will have time set aside for Eucharistic Adoration and Benediction, Reconciliation, Spiritual Direction and a Papal Liturgy. Bryan Medlin will complete his first year of theology at the Josephinum prior to leaving for The Rome Experience. He holds a Bachelors Degree in History from the University of Michigan. For more information and to follow a blog from participants while Bryan is there, visit www.theromeexperience.org From Catholic to Lutheran and home to Rome In preparing his application for The Rome Experience, Gaylord seminarian Bryan Medlin shared his vocations story. Bryan is currently completing his first year at the Pontifical College of the Josephinum in Columbus, Ohio. He is one of five seminarians there from the Diocese of Gaylord preparing for the priesthood. My vocation story started when I was a nine-year-old altar server. I remember how the priest held up the bread and wine, and I remember saying to myself, I want to do that. I grew up active in church youth group, catechism, Vacation Bible School and so forth because I felt God calling me to serve Him in these ministries. In high school, I seriously considered the call to the priesthood, visiting the Detroit seminary and applying for admission in 1998. Though I was accepted, I held back, not ready yet to proceed. Instead, I studied history at the University of Michigan. During college, at the height of the Church scandal in 2002, my family and I left the Catholic Church. I settled in the Lutheran church, but my parents went to another denomination. Despite this break within the family, they always supported my call to ministry. I always loved the Mass but could not embrace the hierarchy at that time. As a Lutheran, I reconsidered my call, and in 2004 began studying to be a Lutheran minister. I was amazed at how much I learned about the Catholic Church in Lutheran seminary. While I was there, Pope John Paul II passed away, and I felt compelled to attend a Catholic Mass in his honor. After that I began to move back toward the Catholic Church. During this time, my parents and brother also returned to the Catholic Church. That summer, I worked as a chaplain at a Catholic hospital. Though I did not receive the Eucharist, I attended daily Mass there and prayed before the tabernacle, and realized how much I truly missed the treasures of the Church. At the end of the chaplaincy, I faced a difficult question  be ordained a Lutheran minister or follow my heart and soul? Ultimately, I obeyed my conscience and returned to the Catholic Church. I became very active in my local parish, with an encouraging spiritual director. Before I could enter Catholic seminary, I had to petition the Vatican because I was considered irregular for Holy Orders according to canon law. My petition went to the Congregation for the Doctrine of the Faith and it was granted, for which I am forever grateful. When my bishop asked me if I wanted to be a part of The Rome Experience, I was humbled beyond belief. I believe The Rome Experience will enhance my spirituality and zeal for the Church in ways I cannot yet imagine.
View Archives
Back to Top