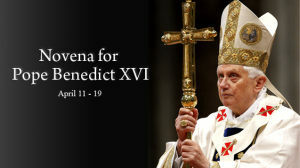 On Oct. 2, 1881, a group of men met in the basement of St. Marys Church on Hillhouse Avenue in New Haven, Connecticut. Called together by their 29-year-old parish priest, Father Michael J. McGivney, these men formed a fraternal society that would one day become the worlds largest Catholic family fraternal service organization. Seeking strength in solidarity, and security through unity of purpose and devotion to a holy cause, they vowed to be defenders of their country, their families and their faith. Bound together by the ideal of Christopher Columbus, the discoverer of the Americas, the one whose hand brought Christianity to the New World, they named themselves the Knights of Columbus. Nearly 130 years later, the Order is still true to its founding principles of charity, unity and fraternity. The Knights of Columbus, often referred to as "the strong right arm of the Church," proudly professes their unwavering solidarity with our priests, our bishops and our pope. In a special initiative announced by Supreme Knight Carl A. Anderson on March 31, the Knights of Columbus are calling on its members and all Catholics to join in a novena for Pope Benedict XVI to manifest our prayerful solidarity with our Holy Father at this time of unprecedented challenge. The Most Rev. Bernard A. Hebda, Bishop of the Diocese of Gaylord, has joined the Knights of Columbus in encouraging the faithful to continually support the Holy Father, as well as our clergy and religious through their prayers. The faithful are particularly urged at this time to pray the novena for Pope Benedict XVI which is scheduled to begin on Divine Mercy Sunday, April 11, and conclude on Monday, April 19  the fifth anniversary of his election. Prayer cards have been prepared and sent to Knights of Columbus Councils nationwide. In addition, a copy of the prayer card for individual use may be downloaded below. Parishes and schools have also been sent electronic files which may be used for quantity reproduction and all materials may also be downloaded from the Knights of Columbus website. How to Pray a Novena The word novena comes from the Latin word novem which means nine. The praying of a novena was derived from the Holy Scriptures. In Acts 1:14, Jesus asked His disciples to pray together in the upper room and so they prayed for nine consecutive days, ending in Pentecost. A novena is most often a prayer said nine times consecutively for nine days, but can also be over nine weeks, nine months or even nine hours. This period of private or public prayer often holds a sense of urgency and is offered to obtain special graces, implore special favors, or to make special petitions Select a time and quiet location each day to pray. Choose a posture that is comfortable and clear your mind so that you may focus on this prayer time and your intention. You may wish to hold a rosary or other item, or nothing at all. The point is to try to remove all distractions and take appropriate time to prepare yourself and focus on your prayer. More than a simple recitation or reading of the selected prayer(s), time should also be taken for meditation and contemplation on the prayer. Repeating the prayer over nine days helps to keep one focused on the prayer intention and the presence of God in ones life. Typically the novena is preceded by the sign of the cross and followed by specific prayers. For this novena, the Knights of Columbus suggest praying the prayer for Pope Benedict XVI as printed on the prayer card, followed by the Lords Prayer, Hail Mary and Glory Be. Most important, of course, is that whatever prayers you choose, they should be offered with a sincere heart and focus on your particular intention. For this novena, our focus is to uplift, strengthen and support our Holy Father Pope Benedict XVI. Repeat this process for nine consecutive days.