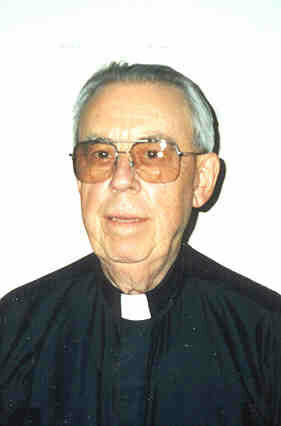 Reverend James Henry Mausolf entered eternal life on Thursday, August 6, 2009 at his home in Traverse City at the age of 84. Father Mausolf was born April 13, 1925 to George and Eleanore (Kranz) Mausolf in Harbor Beach, Michigan. He attended Rock Falls Grade School and Our Lady of Lake Huron High School in Harbor Beach. He went on to St. Lawrence Seminary in Mt. Calvary, Wisconsin, Mary Immaculate Seminary in Glenclyffe, New York and St. Anthony Seminary in Marathon, Wisconsin. He received an STL degree from Catholic University, Washington, DC and an SSL degree from the Pontifical Biblical Institute in Rome. Father Mausolf was ordained on August 23, 1950 by Bishop John P. Treacy at St. Marys in Marathon, Wisconsin and became a Lector in Sacred Scripture for St. Anthony Seminary in Marathon, Wisconsin. From 1954 to 1956 he was a student at the Pontifical Biblical Institute in Rome. He then returned as Lector for St. Anthony Seminary. He became the Assistant at Queen of the Angels Retreat in Saginaw, Michigan in 1959. He was Secretary for the Missions at St. Bonaventure Monastery in Detroit from 1961 through 1973. In 1974 he became Assistant Pastor for St. Joseph Parish in Appleton, Wisconsin. From 1975 to 1979 he was a Chaplain for St. Michael Hospital in Milwaukee, Wisconsin. Father Jim then returned to Michigan where he served as Associate Pastor then Pastor for Immaculate Conception Parish in Traverse City from July 11, 1979 until August 13, 1985 when he was appointed Pastor for St. Mary Parish in Grayling. At that time he was also appointed to the special apostolate for persons suffering from alcoholism and substance abuse. On January 1, 1986 he was formally incardinated into the Diocese of Gaylord. In 1987 he continued his ministry in the apostolate for persons suffering from alcoholism or drug abuse full time with an office in Traverse City. In 1991 he also began providing ministry for the Carmelite Community. Father Jim retired to senior priest status on August 1, 1995 and lived in Traverse City where he died peacefully in his sleep. Father Mausolf is survived by his sisters, Marjorie ODonnell of Fort Gratiot, MI and Rosemary (William) Roggenbuck of Harbor Beach, MI. He was predeceased by his parents and his brother, Kenneth. Visitation will be held on Monday, August 10, 2009 from 3:00 - 8:00 p.m. with a vigil service at 7:00 p.m. at Immaculate Conception Church, 720 Second Street in Traverse City. Visitation will also be held at Immaculate Conception Church on Tuesday, August 11 from 9:30 a.m. until the Mass of Christian Burial at 11:00 a.m. at which Bishop Patrick Cooney will preside and several priests of the diocese will concelebrate. Father Jim will be buried at Oakwood Catholic Cemetery in Traverse City. Memorials in Fr. Jim's name may be directed to Grand Traverse Area Catholic Schools, 123 East 11th Street, Traverse City, MI 49684. We join in prayer for the repose of his soul: May the Angels lead you into paradise.
May the Martyrs come to welcome you and take you to the holy city,
the new and eternal Jerusalem.