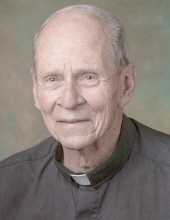 Bishop Walter A. Hurley, Apostolic Administrator of the Diocese of Gaylord, states, “It is with deep sadness that I share the news of Fr. Dickson's passing. We are thankful for his tremendous work and many sacrifices for the Body of Christ here in this life, and we are comforted in knowing that he is now entering his eternal home. Please join me in praying for Fr. Norm, his family, and all those who knew and loved him."

Fr. Dickson's obituary and details of funeral arrangements can be found below:

Let us pray in thanksgiving for the life of Fr. Norm.

Age 83. A Jesuit for over 65 years. He was born in Detroit, MI. He is the son of the late Charles and Antoinette (nee Heuser) Dickson. He is survived by a brother Robert, a sister Dorothy McDowell and many nieces and nephews. His sister Mary Lou Marker predeceased him. He died at Colombiere Center in Clarkston, MI.

Before entering the Jesuits, he graduated from the University of Detroit Jesuit High School (1954). Norm entered the Society of Jesus on September 1, 1954 at Milford, Ohio. He was ordained on July 29, 1967 in Frankfurt, Germany, and professed final vows on February 2, 1979 at Walsh Jesuit High School in Cuyahoga Falls, Ohio.

While in the Society, Fr. Norm earned a Bachelor's Degree in Literature from Xavier University (1958) and a Master's Degree in Classics from Loyola University Chicago (1963). He studied Theology at Sankt Georgen Graduate School of Philosophy and Theology, Frankfurt-am-Main, Germany (1964-1968).

During regency, Norm taught Latin and Greek at St. Ignatius High School in Cleveland (1961-1964). After ordination, Fr. Norm spent 14 years at the recently established Walsh Jesuit High School in Cuyahoga Falls. At Walsh, he taught, was director of student social services, and president (1970-1975). When Fr. Norm was President at Walsh he reserved cutting the grass on the school’s property to himself. He liked riding the tractor and the solitude it gave him. He would say that the seeming monotony of the job gave him a great chance to pray uninterrupted.

In 1982, Fr. Norm was missioned to help start Loyola Secondary School in Wau, South Sudan. While in Wau, he was director of mission at the school in addition to serving as superior of the Jesuit Community. The first 50 students arrived at Loyola in 1984. However, war and turmoil in South Sudan meant the school could only run for two years before closing and suspending admissions in 1985. Norm stayed in Wau until 1987 hoping that things would settle down and the school could reopen. [Unfortunately, the school was not able to reopen until 2006.] After a year sabbatical (at Walsh Jesuit) and a year as an assistant campus minister at the University of Detroit, Norm returned to Africa in 1989. He spent three years as the assistant rector and minister at Hekima College in Nairobi, Kenya.

In 2009, Fr. Norm returned to his great love: parish ministry. He was the administrator of two parishes in Michigan: St Mary of the Woods Parish in Kalkaska and St Aloysius Parish in Fife Lake. He also did prison ministry in the area. Norm continued his administrator duties until, in October 2020, he had to get care for his cancer at Colombiere Center.

When Norm was in Kalkaska and Fife Lake, he asked folks what they thought the people would like. Several folks responded "a vegetable garden". He started one at St. Mary’s and the people of the parish worked it with relish. Every autumn they would send several tons of fresh vegetables to local food pantries to distribute to the poor. Norm said that the garden did more to pull the people together than anything ever said from the pulpit, and gave them a chance to live the Gospel through feeding those most in need. He likewise loved to spend time relaxing each week at Villa Marquette in Omena, Michigan -- one of his favorite places in the world!

Norm was a marvelous storyteller who loved to regale people with his stories. When telling a seemingly outlandish story, there would always be a twinkle in his eyes and a smile on his lips.

Norm did his theology studies in Frankfurt in Germany and kept up his German by praying the Office in German each day. Upon his arrival there he dropped off his bags at the porteria in the care of a priest that he would later learn was his rector. He then went outside and got into a car with an attractive young lady to go on vacation for a week. It was his sister. His rector would retell this story for years saying, “this American came to the theologate, gave me his bags and then took off for a week with Miss America in this fancy car.”

Due to COVID-19 restrictions, attendance at the Vigil and Funeral Mass is private and can only be attended by members of the Colombiere community.

These events will be livestreamed on Youtube. You can watch the Vigil Service and Funeral Mass live at this link: https://www.youtube.com/channel/UC9TJEVaNcLIQmq5H37lepXQ/videos