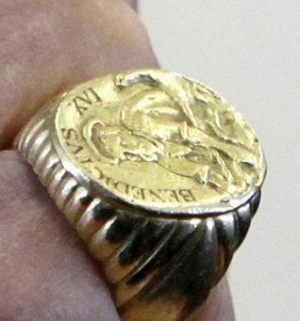 Does the Church have a formal name for the transition period from one pope to another?

Yes, in fact, this period is referred to by two names. Sede vacante, in the Churchs official Latin, is translated "vacant see," meaning that the see (or diocese) of Rome is without a bishop. In the 20th century this transition averaged just 17 days. It is also referred to as the Interregnum, a reference to the days when popes were also temporal monarchs who reigned over vast territories. This situation has almost always been created by the death of a pope, but it may also be created by resignation.

When were the most recent papal transitions?

On April 2, 2005, Pope John Paul II died at the age of 84 after 26 years as pope. On April 19, 2005, German Cardinal Joseph Ratzinger, formerly prefect of the Congregation for the Doctrine of the Faith, was elected to succeed John Paul II. He took the name Pope Benedict XVI.

There were two in 1978. On August 6, 1978, Pope Paul VI died at the age of 80 after 15 years as pope. His successor, Pope John Paul I, was elected 20 days later to serve only 34 days. He died very unexpectedly on September 28, 1978, shocking the world and calling the cardinals back to Rome for the second time in as many months. The second transition in 1978 ended with the election of Polish Cardinal Karol Wojtya  John Paul II  on October 16, 1978.

On February 11, 2013, Pope Benedict XVI became the first pope to resign since Gregory XII in 1415 (and the first to do so willingly since St. Celestine V in 1294). His resignation is effective at 8 p.m. Rome time (2 p.m. Eastern) on Thursday, February 28, effectively beginning a period of sede vacante.

How is the Church governed "sede vacante?"

Upon a vacancy in the papacy, the governance of the Church and of Vatican City State passes to the College of Cardinals which meets regularly during the transition. Once informed of the vacancy, all cardinals not prevented from doing so by some legitimate reason must attend the daily meetings called General Congregations. (Those who have reached their 80th birthday before the vacancy occurred may choose not to attend.) General Congregations are entrusted with the more serious matters, including making arrangements for the funeral and burial of the pope and the upcoming election. A second type of meeting, known as the Particular Congregation, handles more routine matters. It is headed by the Camerlengo (Chamberlain) of the Church (currently Cardinal Tarcisio Bertone) who is assisted by three other cardinals  one from each order of cardinal (see Glossary)  selected by lot for three day-terms. In both the General and Particular Congregations, all decisions are made by majority vote. However, decisions which only the pope can make, such as the appointment of bishops or the convening of the Synod of Bishops, must await the election of a new pontiff.

Among the cardinals, who are the key officials?

During the Interregnum, two cardinals in particular are assigned special responsibilities:
the Camerlengo of Holy Roman Church and the Dean of the College of Cardinals.

Who is the Camerlengo and what are his duties?

Upon a papal vacancy, the Camerlengo immediately becomes the administrator of the Church's property and finances during the transition. He also heads meetings of the Particular Congregation. Among some of the duties assigned to the Camerlengo are officially ascertaining and certifying the pope's death, sealing the pope's study and bedroom, and destroying the Fisherman's Ring. The current Camerlengo, Cardinal Tarcisio Bertone, was appointed by Pope Benedict XVI in April 2007. Born in 1934, he served as Secretary of the Congregation for the Doctrine of the Faith from 1995-2002, when he was appointed Archbishop of Genoa. He was elevated to the College of Cardinals in 2003 and named Vatican Secretary of State in 2006.

What is the Fisherman's Ring and why is its destruction significant?

The Fisherman's Ring (pictured left) is a signet ring engraved with the image of St. Peter fishing from a boat and encircled with the name of the reigning pope. It is not worn by the pope. Rather, it is used to seal important documents. With its destruction, the power of the deceased pope is symbolically extinguished. In what has traditionally been a private ceremony, a small group of cardinals, together with members of the papal household and the Swiss Guard, enter the pope's apartments to witness the ring's destruction. After the ring has been inspected by those present, the Camerlengo defaces the ring with a silver knife. After a second inspection, the ring is placed on a lead block and struck with a silver mallet by the Camerlengo until it is destroyed.

Who is the Dean of the College of Cardinals and what are his responsibilities?

The Dean of the College of Cardinals is a senior cardinal elected to his permanent position by the full College and approved by the pope. During the sede vacante, he presides over the General Congregations and serves as the first among equals within the College. He is responsible for notifying international leaders and the diplomatic corps accredited to the Holy See of the pope's death. The Dean is also responsible for notifying the other members of the College and calling them to Rome. The current Dean, Cardinal Angelo Sodano, was born in 1927, elevated to the College of Cardinals in 1991, and confirmed as Dean in April 2005.

Since Cardinal Sodano is over 80, he will not participate in the conclave to elector a successor to Benedict XVI. The Sub-Dean, French Cardinal Roger Etchegaray, is also over 80, leaving the Deans duties within the conclave (such as asking the newly elected pope if he accepts his election and what name he chooses) to the senior cardinal present, Italian Cardinal Giovanni Battista Re.

What is the conclave?

The practice of carrying out the papal election in conclave originated in 1268. Eighteen cardinals had assembled in the Italian town of Viterbo, where Pope Clement IV had died, to elect his successor. Two years and nine months later, no pope had been elected, and the frustrated townspeople decided to force a decision by walling up the doors of the meeting place. The cardinals' only contact with the outside was a small opening through which food was passed. Eventually, the townspeople even removed the roof of the building, exposing the electors to the elements. Pope Gregory X finally was elected on September 1, 1271, ending the longest papal election.

What method is used for the election?

John Paul II's constitution permits election only by scrutiny, or secret ballot. He eliminated election by acclamation, which allowed the cardinals to proclaim a new pope unanimously.13 He also eliminated election by delegation which empowered a small committee of electors to select a compromise candidate in the event of an electoral impasse. Pope Gregory X was elected in this way in 1271.

How does balloting actually take place?

Disguising his handwriting, each cardinal writes the name of his selection on the ballot card and then proceeds by seniority to the altar to cast his vote. For the past 300 years, the receptacle for the ballots has been a 25-inch gold chalice, covered by a golden plate.14 Standing before the altar, each cardinal declares aloud: I call as my witness Christ the Lord, who will be my judge, that my vote is given to the one whom, before God, I think should be elected. He then places his twice-folded ballot on the plate, which he tips so the card falls into the chalice. Then the unopened ballots are counted. If they do not correspond to the number of electors, they are burned and a new vote taken. If the numbers coincide, the ballots are opened and recorded by each of the Scrutineers, the last of whom reads aloud the name on each card so the other cardinals can keep a tally if they wish.

How many votes are necessary to elect a pope?

A candidate must receive two-thirds of the vote to be elected. (If the number of electors cannot be divided evenly by three, a two-thirds plus one vote is required.) Regardless of whether any single candidate has received the mandatory two-thirds vote, the ballots are inspected and the Scrutineers' calculations double checked by the Revisers.

What happens if no one gets a two-thirds majority?

If no one has received the required two-thirds majority, the ballots are set aside, and a new vote begun immediately, with two votes each morning and two each afternoon until a new pope is elected.

What happens after someone has received the required number of votes?

Upon the election of a new pope, the Dean of the College of Cardinals (or, in the Dean's absence, the most senior cardinal present) steps forward and asks the newly elected his assent: Do you accept your canonical election as Supreme Pontiff? If the one elected accepts and he is already a bishop, he is immediately the bishop of Rome, pope, and head of the College of Bishops. The Cardinal Dean then asks: By what name do you wish to be called? If he is not already a bishop, he is immediately ordained a bishop by the Dean or the most senior cardinal present.

Has the pope always taken a new name when elected?

No. In fact, before the eleventh century, popes commonly kept their baptismal names. The first known instance of a new pope choosing a different name was in 533, when a man bearing the name of a pagan god, Mercury, was elected; he choose the name John II. The practice became commonplace with the election of Sylvester II (999-1003).

Men baptized with the name Peter have chosen new names upon their election to the papacy out of deference to Peter the Apostle and first pope; John XIV, elected in 983, was the first to change his name from Peter. In all, the popes have chosen from a total of only 81 names. The most popular name of all has been John (with 23). Other popular names include Clement (14), Benedict (16), Gregory (16), Innocent (13), and Pius (12). Pope John Paul I was the first to choose a double name, and the last pope to choose a name without precedence was Pope Lando (913-14).

Copyright 2010 by the United States Conference of Catholic Bishops, Washington, DC. All rights reserved. No part of this work may be reproduced or transmitted in any form or by any means, electronic or mechanical, including photocopying, recording, or by any information storage and retrieval system, without permission in writing from the copyright holder.