Creation of the 40th Anniversary Logo 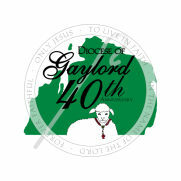 The Diocese of Gaylord has released the official logo for its 40th Anniversary. Inspired by artwork submitted by high school students from St. Mary School in Lake Leelanau, the logo will be used on a variety of materials and announcements to highlight the anniversary year.

Bishop Bernard Hebda had invited each of the Catholic High Schools to submit ideas for a logo to help celebrate the 40th jubilee. Those ideas were then presented to diocesan staff who selected the entry submitted by high school seniors Claire Garthe and Erin Perkette along with 11th grader Michelle Rath as the basis for the logo.

We are really happy with the final creation, said Candace Neff, Director of Communications for the Diocese. The logo highlights many aspects of our diocese and our history. Its unique and we think the final design not only remains true to the initial inspiration provided by these young people, but also incorporates ideas shared by others in the design process.

The logo consists of a green background outlining the Diocese of Gaylord which encompasses the twenty-one most northern counties of Michigans Lower Peninsula. The color green was chosen to recall the natural beauty of the pine trees and lush greenery for which the territory of our diocese is known.

The crozier, resembling a shepherds crook, was included to reflect that the diocese was born with the ordination of its first bishop/shepherd, Edmund Cardinal Szoka, on July 20, 1971.

The white lamb symbolizes the faithful of the diocese who have listened so attentively to the call of Christ, the Good Shepherd, these past 40 years. The lamb remains youthful but is of a size that suggests growth and a certain maturity. The image is also rich in Eucharistic significance and reminds us that we are a flock who strive to imitate Jesus, the Lamb of God, and who find our common identity and strength in the Eucharist and the sacramental life of the Church.

The lamb carries a ruby rosary. Through the rosary, we allow Mary, our Mother and Diocesan Patroness, to draw us closer to her Son, Christ, as we contemplate the Joyful, Glorious, Luminous and Sorrowful mysteries of our faith. The color of the beads and cross were chosen because the ruby is the traditional 40th anniversary stone.

The four phrases encircling the logo are the Episcopal mottos of each of the four bishops who have led the Diocese of Gaylord from 1971-2011: Edmund Cardinal Szoka (To Live in Faith); Robert J. Rose (In the Name of the Lord); Patrick R. Cooney (Forever Faithful); and Bernard A. Hebda (Only Jesus).

Many special events are being planned throughout the year as the diocese celebrates this milestone in our history, including the special anniversary liturgy which will take place on July 20 at 5:00 p.m. at St. Mary Cathedral in Gaylord. All of the former diocesan bishops are making plans to participate and all of the faithful are invited. A picnic will follow the Mass.

Click on the links in the blue box on the right to learn more about events scheduled to celebrate our 40th anniversary.  Events are being added and updated regularly, so check back often for more information.